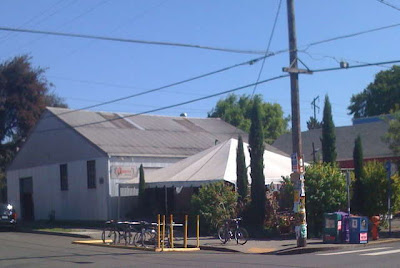 On (a gloriously sunny and warm) Saturday, Amnesia Brewing hosted the Single Hop Festival. The festival itself was great: interesting beers that allowed drinkers to get to know the characteristics of the hops used in brewing. And there were some standouts, my little cabal agreed that Amnesia's Cream of the Crop, Uprights Pils and Double Mountain's Cluster F#%k were real winners. Many of the beers, interestingly enough, were very small - which turned out to be a good choice given the sunny day in the 80s. Smaller beers kept the malt at bay so the hops could chine through. But Double Mountain brought the hop bomb and was both my favorite and a revelation.

Their beer was hopped entirely using cluster hops, which my learned and pedantic friend explained was the genetic forbearer of Willamette and Cascade hops and was, at one time used as the main bittering hops for US macro lagers. Thus I expected very little in terms of flavor characteristics - a mild, neutral hop.  But no!  The beer had the most amazing aroma and flavor of passion fruit.  If I had not known otherwise I would have sworn passion fruit was used in the brew.  It was a lovely beer and I ended up having a second.  Who knew that cluster hops were so delightful and distinctive?

And this is really the point of this post: festivals with a strong theme (a raison d'etre if you will) such as this one are really the way to go.  I learned interesting things about beer and brewing.  If I just wanted to drink good beer, I can stop in any one of about 100 places in Portland for a tap list that insanely great.  A festival should be enlightening and novel.   A theme also gets local brewers to brew special beers with a purpose and the drinker can see the brewer's personality in their take on whatever theme is highlighted.

I also prefer small laid back affairs like this one.  The boisterous OBF has its place, but we really need only one of those.  I enjoy a relaxed, quiet affairs conducive to good talk and appreciation of the beer.  More such themed events are coming - the next one that my learned friend assures me is going to be great is the Fruit Beer fest.  Let's hope this is a trend that will continue.
Posted by Patrick Emerson at 9:34 AM

It's never good when a university professor calls you pedantic. In all other ways, I endorse this blog post.