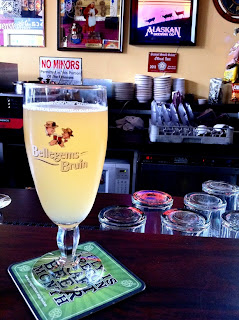 For those in Portland there are some great, great beers to be had these days.  The lion's share are at Belmont Station where the Puckerfest is ongoing.  Calling it a fest might be slightly misleading as there is no tent, crowds, whoops, etc.  It is just a special set of beers on tap in the bar with meet-the-brewer events each night.  I went Wednesday and tasted the four Upright beers as well as the Flat Tail Corvaller Wisse (pictured above in a photo by Jeff Alworth).

The Uprights were, what else, great - with a few warts: one was too ginny for my taste. But the Blend Love is a real crowd pleaser and I was ... pleased.  For me the real find was the Corvaller Wisse which was phenomenal.  At 3.6% is is a real summer session beer and the lacto sourness is not as astringent as brett can be.  Citrus esters are present and after a long bike ride to make it from Sellwood to Belmont Station, it was a wonderfully refreshing beer.  I hope this becomes a summer standard at the brewpub.

The star for me was the Double Mountain Devil's Kriek. This is no surprise, it is one of my all time favorites.  Beautiful cherry notes wrapped up in a sumptuous bronze malt base - just sour enough but not too sour.  Rhapsody.  Check out the nice video at Jeff's Beervana site about making kriek at DM.


After that it was off to Deschutes to grab some dinner prior to the Timbers game.  There they had the Armory XPA on cask.  I don't think I have had a beer that is so different on cask as on tap - in fact I asked for a taster of the tap version to confirm. There are all kinds of fruity esters present in the cask version, hints of cherry and apple that are covered up by the CO2.  It was great.  After that, I tried the Chainbreaker White IPA thinking it was the collaboration beer with Boulevard.  Apparently not.  This is an all-Deschutes version and it rocks.  To me it is a hoppy saison, with the characteristically Dechutes pitch perfect use of hops.  It is the perfect beer for a hop head who appreciates Belgian-style beers but who loves his hops.

Finally the Black Butte XXIII is rapturous.  I had left my bike parked in front of Deschutes (conveniently) so I ducked in for a snifter of the elixir before heading home.  It was the perfect nightcap.  What I like most about it is the very, very subtle blend of 1/4 bourbon barrel aged beer with regular stuff giving it just the hint of bourbon not the overwhelming bourbon all too common in such beers.

NB: Deschutes' menu has changed (shrunk mostly) since I last visited, most notably absent now are the pizzas.  But the beer pretzel remains.

Nice weekend to get out and experience some great rare beers.
Posted by Patrick Emerson at 12:28 PM