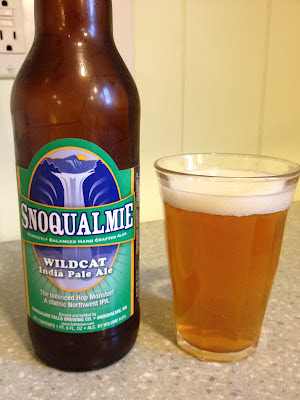 "100% Columbus Hops."  So said the label, and that was good enough for me. Columbus hops are a big fave of mine - particularly pungent they give Bear Republic's Racer 5 and Ft. George's Vortex IPA their characteristic flavor that is lovely and resinous.  But single hop variety IPAs are dangerous things, with big hop additions the one characteristic of the hop easily starts to dominate and often in an overwhelming way.  And if I had to guess Columbus would be a disaster of a single hop, all that lovely resinous, stanky character not balanced by citrus and pine?  No way.  On the other hand there is nothing that reveals the true nature of a hop than a dingle hopped beer - something that Jeff and I have brewed a lot recently for just this purpose.  Sometimes good, sometimes less so but always revealing.  I know know East Kent Goldings, for example, intimately.

And thus it was that over spring break whilst visiting me mum on Bainbridge, I picked up a Snoqualmie IPA excited to see what a single hopped Columbus beer would taste like, but not expecting anything particularly good.  But I was right and wrong, both in good ways.  Yes, the Columbus hops character shines, but no it is not at all overly resinous and pungent.  In fact there is very little resin and stank at all, mostly Columbus reveals itself to be a wonderfully rounded out piney and spicy.

Snoqualmie sets the hops in a very light but beautifully balanced beer that allows the hop to shine without much residual sugar.  I suspect much of the hops are late additions because, though listed at 6.6% ABV and 75 IBUs the beer is neither heavy nor bracingly bitter.  The color is a light amber approaching straw, it is well conditioned and crystal clear (unlike, say, Vortex IPA) and the light pilsner, pale and crystal malt base is unassuming and provides a nice subtle canvas for the Columbus hops.

Though I would never recommend taking beer advice from an economist (nor advice about much besides things economic), you should take my advice and seek this out. It is always nice to taste the true character of a hop and Snoqualmie IPA gets you intimate and cozy with Columbus.  As an aside, try Deschutes' Mirror Pond for a great intro to Cascade hops - the grandaddy of all NW Pale Ales and IPAs.
Posted by Patrick Emerson at 12:09 PM