A Year of Widmer Rotator IPA 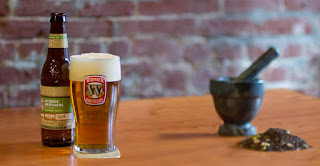 It has been roughly a year since the Widmers introduced a new concept in its mainline IPA: the Rotator series in which a new recipe would be rolled out every three months or so.  We are now in the fourth iteration in the series and it is the most unique IPA they've rolled out yet - the "Spiced IPA."

There is a lot going on in this beer and I suspect that this beer will divide folks into two pretty distinct camps: lovers and haters.  I will be totally honest: it is definitely not for me but then I never expected it wold be for I am not a fan of spices in beer.  Holiday ales, for example, are often too spicy for me.  But to my surprise it is really the tea that jarred my palate.  It is a very well made beer, make no mistake, and you should definitely try it because it is revelatory no matter which camp you end up in.  And for such a non-mainstream beer, the Rotator aspect means that it is being sold as one - you'll find it everywhere, including on tap at Jeld-Wen Field during Timbers games.

So over the last year we have had (in order of their release):

X-114: An 'experimental' IPA with an experimental hop that has gone mainstream.  This is the one that hit my sweet spot.  Super floral and citrusy with a nice malt and alcohol balance, it quickly became a favorite of mine.

Falconer's IPA: An aggressively bitter -hopped IPA of the 'old school.'  Folks who love the So Cal IPA style would probably love this one, for me, though I liked and enjoyed it, it missed the aromatic sweet spot and was a bit too caustic.

O'Ryely IPA: Rye and my palate generally don't get along very well - I find rye often imparts a soapy quality that I dislike intensely.  But the rye here is very subtle - I get no soap but a nice grainy spiciness that complements the hops brilliantly. I thought of this as a perfect winter IPA, a little warmer and spicier, but I would turn away from it as the temps climb higher.

I hope that by imparting my personal refelctions of the beer that I do not skew the results too much, but I have put up a poll asking which IPA you prefer.  You have to pick just one.  Notice I don't say 'best,' this is about the one you would choose if you had all four on offer but could pick only one.

I would love to know how they sold but even if the Widmers shared the data it would be hard to interpret  It is hard to de-trend and isolate an individual beer's effect on sales. By this I mean that if you bought an X-114 and loved it and went back and bought the IPA again, you might have missed the X-114 and picked up a Falconer's.  When you did so you might not have noticed the change or you might have noticed the change but figured that since you liked the X-114 your would give the Falconer's a try.

I would also like to know what they are thinking now after a year into the project: will the start re-running the best sellers, spin those off into separate beers, or just keep offering new one-offs.

I hope, of course that they give us the X-114 again in whichever format they choose and I especially hope it gets back on tap at Jeld-Wen because I am just not into the Timbers and Spiced IPA combo.

Overall, I am a huge fan of this project, a big fan of the beer (even the ones not suited to my palate) and think the Widmers deserve tons of credit for trying something different with such an important line of beers.  Kudos.
Posted by Patrick Emerson at 1:43 PM

Hate is a strong word. Let's just say I'm not a big fan of the spiced IPA.

I enjoyed them all, though I must agree that the Spiced IPA isn't my favorite.

That said, I miss Broken Halo.

I'll second the missing Broken Halo, but the Falconer was good.

X-114 was a great...close to Broken Halo with maybe a bit more in the way of floral and citrus. Thumbs up.

Falconer was, as you say, in the older style. More malt, heavier. I did not care for the hop character of this beer. Thumbs down.

Spiced IPA was an experiment gone bad. I did not care for it the instant I tried it. I'm not alone. I've heard many similar comments. Thumbs hard down.

Captain Shaddock is the next Rotator and should be out soon.

I'm not sure what was so wrong with Broken Halo in the first place. I realize the Rotator series gives them some room to be creative. But I wonder if they're looking for a solution where there wasn't really a problem to begin with.

The Beer Guy did a review of the Widmer Brothers Spiced IPA a few weeks ago for Life of Dad. Spot on with the comment regarding there being lovers & haters of this beer, but agree that "hate" is too strong of a word.

Loved the X-114, enjoyed the Spiced IPA, appreciated the O'Ryely and drain-poured the Falconer's Flight. I know that the Falconer's hop blend is for a good cause but I haven't enjoyed any beers made with it. I saw labels with Capt. Shaddock printed on them... when is that getting released!?!

I really enjoyed the X-114. I think it showcased all the best parts of a modern IPA with the floral and citrus notes. I love a lot of Widmer's beer but when it comes to IPA's, the Pitch Black and the X-114 are the only ones that come close to a Ninkasi. I would like to see this one go mainstream like the Pitch Black did.

Love the rotating IPA series! My wife and I saved a bottle of each and compared them side by side when the Spiced came out. If you're interested, here's the post on our blog: http://bottle-battle.blogspot.com/2012/03/widmer-brothers-rotator-ipa-series.html

X-114 was not around long. By far my favorite. Would love to see that regularly on the shelf.

Spiced IPA was a nice IPA on occasion - can't do super hoppy all the time. Overall a fun experiment and gutsy jab from Widmer. I like the attitude.