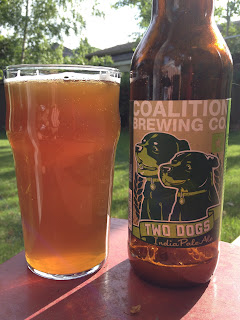 A couple of local brewpubs in the bottle that I picked up at my local New Seasons: Coalition's Two Dogs IPA and Burnside's IPA.

Coalition: This is a wonderfully sessionably IPA, at 5.8% ABV and 77 IBUs it is neither too big nor too heavy.  It is not abusively bitter, in fact it is rather mild for NW IPAs but with a bright hops fragrance and aroma due, most likely, to dry hopping.  To me it is a perfect summer IPA - lots of hop character but lighter and immensely quaff-able.  The malt note is particularly lovely with the addition of oats it has a nice softness and biscuit flavor.  If I have a quibble it is in the fact that the hop note is slightly muddy, there is no one note that rises above the rest and gives it a distinct character.  The Cascade hops were the dominant note I perceived but nothing came in too brightly.

Burnside: Off the charts bitter...face-meltingly bitter.  Not really out of balance, at 6.6% ABV and 88 IBUs it has enough body to keep up (barely) but within about three sips your tongue is numb and your head is starting to float.  All of which is great if you are into that sort of thing (and many of you are given the success of Stone Brewing) but I found it a bit too aggressive.  To me it has that SoCal character of super bitter without the saturated pine and citrus hop notes you find in beers like Total Domination or Ft. George's Vortex.   It is precisely that saturated flavor I like and that I think Burnside lacks.  The beer is on the heavy side and the color is darker than some IPAs, I'd call it a dark caramel, so it is not in any way to be confused with a sessionable beer. But this is all about me, objectively it is a finely crafted beer and if you are a fan of Stone's beers, I suspect you will love this.  And if you just love bitter - there is plenty to be found here.

As an aside these two beers are a perfect example of why IBUs are totally useless - I barely pay attention to IBUs on bottles or menus.  I get a sense of what the brewer is after if they list 80 or 20, say but otherwise I think there is little utility in them.  Given the listed IBUs and alcohol content these beers aught to have a similar level of bitterness, but the Burnside is abusively so and the Coalition is only slightly bitter.

Posted by Patrick Emerson at 1:59 PM

I hate to quibble, but anything that can be described as "face-meltingly bitter" can't also be in balance. Perhaps it's not ruined by the hops, but balanced: no.

(I agree with the review, though, and it's astute to associate Burnside with San Diego.)