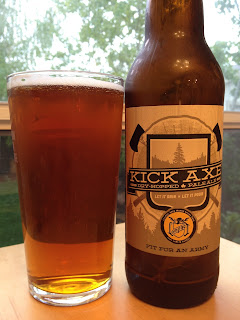 I had intended to blog about the Oregon Garden Brewfest this week but I has the misfortune of coming down with the flu which prevented me from attending the real fest.  I did get to attend the Brewer's dinner and I got to see the lovely Garden and Resort so I'll get a post up on that soon now that I have fully recovered.  But as it is Friday and the Timbers have a home game tomorrow, I figured it was finally time to give Kick Axe a try.

Kick Axe is a fairly true to form Pale Ale in the tradition of Sierra Nevada.  Is is medium bodied and a rich amber color, beautifully clear and has a tinge of orange when held to the light.  The nose is immediately assaulted by the beautiful aroma of Cascade hops. Which is of course perfect for a Timbers Army inspired beer.  I get a big hit of pine form the beer, I am not sure if it is single hopped with Cascade but if so it would be fairly true to form for me, for come reason Cascade express a lot of pine to me - more so than most it seems.  It is a really nicely balanced beer, the malt is present but does not get in the way, the hops are the point here.  I might have gone slightly lighter on the malt, it could be described as a tad malty given the hops, but the flavors are subtle and create a reasonable backbone.  And I am a hophead, balanced to me is probably ridiculously hoppy. To me this beer is as big a homage to the Northwest as you can get.  I suppose a big hoppy IPA would be another obvious choice, but having nice big hoppy beers that do not assault you with either bitterness or alcohol is a wonderful and somewhat rare thing.

At 5.2% ABV and I'll guess about 45 IBUs, Kick Axe is wonderfully aromatic and flavorful and you can get through a whole pint and still walk away from the table in a straight line.  It may be a seasonal one-off but I don't mind calling it one of the best Lompoc beers full stop and you can consider this a vote for making it a regular in the stable of Lompoc beers.

But what of the Timbers, they are neither balanced nor is their aroma particularly pleasant these days.  Since I am a genius, let me lay it bare: forget the defense, that is not the problem.  The problem is there is no service into the box from the wings and no creative play whatsoever in the center of the midfield to break down opponents.  Boyd is a handful but without service you hardly have to bother marking him.  The Timbers have to be the easiest team to defend in the league.  There, problem assessed.  I'd like to see Jewsbury playing right back (as has been rumored) because he is adding nothing in the midfield and usually delivers a good cross.  the new Scot, Scott, seems a bit slow on defense right now, but puts in a good long ball and cross.  Let Chara be the holding midfielder and let Songo'o try the #10 position (number is now free after all).  Okay, so I have no idea but I'd rather see the Timbers stick to a style of play than keep changing it in the face of recent performance.

So hopefully, you can enjoy a Kick Axe while celebrating a Timbers win rather then using it as a way to forget your woes after a loss.  But either way, its a good tipple.
Posted by Patrick Emerson at 6:00 PM