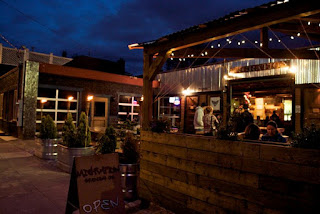 It had been a long time since I visited Migration Brewing on NE Glisan St. when fate brought me there last Friday evening.  I never would have returned on my own given that my one and only trip there was an unmitigated disaster: the beer was a horror show.  It was both badly infected and poorly crafted, as I wrote in my original review of Coalition and Migration.  I raved about Coalition at the time and still think very highly of their beer.

Skip to Friday and Migration, beerwise, was like an entirely different place.  Not one beer had a trace of infection, DMS or diacetyl and all were well crafted (but super duper hop heavy) and one was, I thought, exceptional: the Glisan Street Dry Hop - an exceptionally aromatic and sessionable beer.  The IPA is an in-your-face bitter hop depth charge but is intoxicatingly aromatic and flavorful, at least in the first few sips when you can still taste anything - anything after and your tongue is singed beyond repair by the hops.  It was great to see that they have really figured out this brewing thing and are starting to rock.

It is also interesting to note that if you make a good enough space and have a good location, the punters will support you even if your beer is a work in progress.  Because Migration's space is very good (though still retains that frat boy grunge) and location is fantastic they never appeared short of custom.

Coalition on the other hand, which came out of the gates firing on all cylinders with their beer was a bit quiet for a Friday nigh when I walked by on my way home from Migration.  Their space is lovely as well but it is quite small and their location is a little more out of the way.  They have a limited kitchen as well and this may be an impediment as well.

Which goes to show, I suppose, that there is a lot more to the brewpub business than just the beer.  Anyway, congratulations to Migration and if you are like me and wrote them off long ago, now is a great time to give them another look.  The groove is on.

Note: I should mention that I have seen Coalition beer on sale in 22oz bottles at New Seasons and you should definitely give them a try if you have never had the chance to visit the pub. Good stuff.
Posted by Patrick Emerson at 12:07 PM