A Beer Tour of Britain 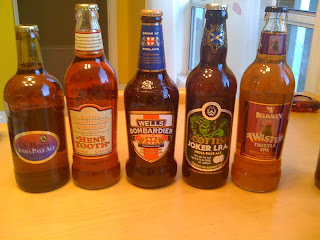 I am on a bit of a British kick these days in response to officially becoming a British citizen.  And in celebration of my new, and more useful, passport I waddled on down to Belmont Station and bought up a bunch of British ales.  Interestingly, there were almost as many Scottish beers as English.  I wonder why such a high proportion of Scottish beers make it to Belmont station?

I actually was not in the hunt for many, I just wanted to pick up some Belhaven (speaking of Scottish beer) but I was intoxicated by the amazing array of British beer.  I have also been on a bit of a crusade for smaller, more mild ales as too much attention in the NW is on big hop bombs (which I adore, but am not always in the mood).  In addition, there was a bottle of Thornbrige Jaipur highlighted in the great Beertickers film (though at a walloping $8+, I did have a moments pause).

I will try and give some specific tasting notes, but as many of the beers are quite similar, I worry about having enough to say and not ending up sounding like Bill's beer review generator.

It'll take me a while to make it through all the beer, but it has already been a week and I have had a chance to sample a few so here are a few initial impressions. 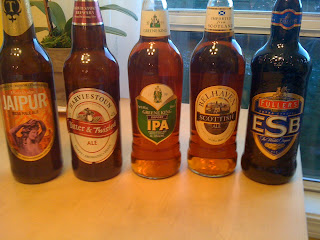 First, what is up with clear bottles?  Bad enough for the domestic market, but for beer that has to cross the pond and the North American continent (in my case), clear glass is a poor way to make sure your beer arrives at my lips un-struck.  It is certainly true that many of the beers look beautiful in the clear glass bottles, but the risk to the contents is quite high.  Perhaps there is enough awareness in Britain about proper handling of beer that they don't have problems (one expects this must be true or else brewers would not find it worth it).  Perhaps we'll get to a day in the US where we too can admire our beer before even opening the bottle.

Fortunately, so far they have all been in good nick, which is point number two: they are remarkably fresh tasting - perhaps not as bright and vibrant as they might be having not had to make the sea voyage - but very good nonetheless.  Here's to modern container shipping, I suppose.

Third, I associate the mineral quality of the Burton-on-Trent with English ales (e.g. Marston's) but I find a hint of it throughout the beers I bought, including Scotland.  So is this gypsum infused water common there too or do Scottish brewers try and mimic the mineral quality of English ales by adding gypsum, or I am I just imagining it.  I, of course, find it delightful.

Some reactions so far.  For an absolutely delightful and perfectly balanced English IPA, you simply cannot do better than the St. Peter's IPA.  The Beerax was with me during my shopping episode and told me to buy it, he was not wrong, it is superb.  For an more English-crossed-with-Northwest IPA the Thornbridge Jaipur was also fantastic but, as mentioned, quite spendy.  It is well worth a try, however, especially if you like the bigger NW style IPAs.  Another surprisingly big and bold beer is the classic Fullers ESB.  This is a beer that takes the Extra Special seriously and is a malty, hoppy mouthful, it is very good but not a session beer.

The big disappointment so far came from Scotland, the Williams Brothers Scottish Joker IPA.  I found it a dull, muddled mush of a beer - thin in body and weak in hops.  My five year old liked it the best for the joker on the label so there you go...
Posted by Patrick Emerson at 12:01 PM

I see my plan to enjoy some of these with you has failed. Aren't you Brits supposed to be generous?

I had a bottle of BrewDog Punk IPA a fortnight back. It did not meet my expectations.

The Alström Bros rated it Very Good; perhaps my bottle was mishandled.

Jack, agreed, that Punk IPA isn't much to speak of. It's aptly named, though perhaps not in the way BrewDog intended.