Context and Relativity in Beer Prices 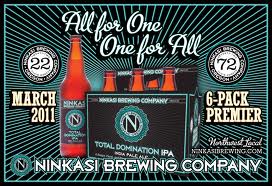 In economics, it turns out, relative measures matter a lot.  For example, peoples' satisfaction with their own income depends a lot on the incomes of their neighbors and friends.  People place value on things like cars and barbecues that depends not only on their own intrinsic value but on how much better they are from the next best thing.   This fact does not easily fit into a lot of economic theory that deals only in individual decision making.  You have do get into game theory to start to describe these types of values that depend on others actions - and that gets hard quickly.

Anyway I thought of all this when I finally encountered a Ninkasi six-pack in my local grocery store and was taken aback by the price: $10.99.  Holy s#%t, I thought, that is expensive. It is substantially more than say a Bridgeport, Deschutes or Full Sail sixer.

Except that it isn't of course, in fact it represents a substantial discount per ounce then the standard 22oz. Ninkasi bomber bottle that generally retails at $3.99.  Bill Night has been pointing this out for a long time, of course, but it is one thing to talk about rationally and quite another to experience it emotionally.  Using Bill's Six Pack Equivalent (SPE) calculator it is easy to see that a 22oz bomber at $3.99 translates to a six pack price of $13.06.

So the Ninkasi sixer actually represents a much better deal than the previous 22oz bottle which makes little rational sense as the packaging per dollar has gone up.  But of course when you buy a six pack you are buying 72oz total and thus the better price is a volume discount.  See previous posts on non-linear pricing to understand why companies can do better but following a non-linear pricing strategy.

But what really matters, at least to the front of my mind where the first emotional responses form is that Ninkasi 22s were generally among the cheapest ones on the shelf and now the Ninkasi sixers are the most expensive.  And where I was very happy to fork over $4 for a 22, I am now reluctant to spend $11 on a sixer even though I am the only beer drinker in my household and a 12oz bottle of a big Ninkasi beer is generally all I need.  Its all in the framing - the relative comparisons.  Before I would look at a bomber of Deschutes Red Chair, say, for $5.49 and quickly choose Ninkasi.  But now I look at a sixer of Red Chair for $6.99 and a sixer of Ninkasi for $10.99 and I am not likely to buy the Ninkasi.  Except that I will probably buy a bomber - despite my knowledge of Bill's SPE calcs.

I always thought of Ninkasi as very savvy for coming in at an aggressive price point for their bombers and it'll be interesting to see what happens now given that their sixers are going to be relatively expensive.

Because it is all relative.
Posted by Patrick Emerson at 4:50 PM

The Not So Professional Beer Blog said...

I'm a big fan of Bill's SPE calculator was thrilled to see Ninkasi's six packs, even at the seemingly high sticker price. I like that they are cheaper than their 22 oz. big brothers. But the main draw for me is that I usually drink just one beer (12 oz.) a day and a bomber is more than I need. So Ninkasi has just added me as an incremental customer by selling six-packs.

I expect Ninkasi is in an experimentation phase and is trying to grow market share while not cratering their margins by competing at the $6-$8 six-pack price point. I'm willing to wager a Total Domination that they will eventually drop down to that price range.

First, wow you guys have some great cheap beer in Portland. Color me jealous.

Second, I spoke with a brewer here in Baltimore about a year ago regarding pricing and packaging strategies, and he some very interesting things to say. I don't know if you have encountered 4-packs yet (which are really, really sneaky since they look just like 6-packs in the cooler until you pick one up), but brewers basically have a choice to package their premium offerings as either a 22oz bomber, a 4-pack, or a 6-pack. I was struck by this comment from my brewer friend: "Our customer will not pay more than $12-$14 for a six pack or $10-$12 for a 4-pack, but they will happily pay $6 or $7 for a bomber." Doing the math, that works out to $2/12 oz for 6-packs, $2.50/12 oz for 4-packs, or $3.67/12 oz for bombers. In this case, bombers are clearly the higher margin product, and for a limited release seasonal beer may well be the way to maximize profits.

The curious thing is that Portland beer pricing is so different than East Coast pricing (this could be because of taxes, or Maryland's prohibition on grocery store beer sales). You balk at a $10.99 6-pack, but I see that price and think "cheap!". This differential could significantly alter the math on the bomber/6-pack pricing decision if there is enough inelasticity for brewers to begin raising their prices.