Brew Dog, the boundary pushing Scottish brewery most famous notorious perhaps for the beer sold in a stuffed stoat, has done a brilliant masterstroke: four single hopped IPAs sold together in a four-pack.  Called the IPA is Dead, these beers are hopped with some more exotic hopps: Bramling Cross, Citra, Nelson Sauvin and Sorachi Ace. 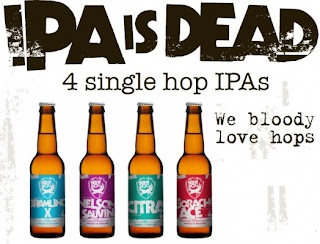 I think it is an absolutely brilliant idea. What a great way to really get familiar with hops and the character they add to beer. They use the same yeast and malt bill in each one, so they are all the same ABV, and they hop to the same IBU level.

99% of beers on the market are made with a blend of hops, we want people to get to know the characteristics, flavours and nuances of some the most interesting hops on the planet. The only way to do this was to showcase them in single hop beers. Oh and to use mountains of hops to make sure the resultant beers were positively exploding with their respective hop flavours!

They go on to provide tasting notes:

The Pacific North West of America is home to the Citra hop. America is not just about cheer leaders, a silly version of football, elastic top jeans and cheeseburgers. They grow remarkable hops and Citra is a killer example of this, embodying all that is good about American hops and then some. A relatively new hop on the block, it may even seduce you into thinking the American Dream is not just a catch phrase to sell movies and elect Presidents. Fearfully hard to resist, this beer is loaded with brash citrus, grapefruit orange, hints of resinous pine and touches of black currant. Devilishly moreish. I am a little bit too obsessed with this beer for my own good.

Good old Bramling Cross is elegant, refined, assured, (boring) and understated. Understated that is unless you hop the living daylights out of a beer with it. This is Bramling Cross re-invented and re-imagined and shows just what can be done with English hops if you use enough of them. Poor Bramling Cross normally gets lost in a woeful stream of conformist brown ales made by sleepy cask ale brewers. But not anymore. This beer shows that British hops do have some soul, and is a fruity riot of blackberries, pears, and plums. Reminds me of the bramble, apple and ginger jam my grandmother used to make.

A hop that tastes of bubble gum? Seriously? No, we did not believe it either. But it does! This is one unique, son of a bitch of a hop. Lemony, deep, musty with a smoothness which belies its power. This hop is lemony like a lemon who was angry earlier but is now tired because of all the rage. This hop of Japanese origin is best enjoyed trying to make sushi from your gold fish, or trying to persuade your girlfriend (or boyfriend maybe) to dress up as a Geisha for Valentine’s Day.

Nelson is a love it or hate it kinda hop. We are cool with that, if we wanted to keep everyone happy we would be brewing Fosters anyway. Sharp as a razor, this New Zealand hop slices its way through your taste buds and is brutally resinous, almost scraping the intense flavours of passion fruit along your poor tongue. There is a huge depth of tropical fruit flavour with astringent gooseberry balanced against the robust malt base. Throw another shrimp on the Barbie mate and you are all set. New Zealand is near Austria, right?

I think Full Sail should get on this, pronto. Why Full Sail?  Well John Harris already does this kind of thing - for example at free hop time, he usually comes out with two or three versions using different hops. Plus they have the resources to pull it off commercially.

Next should be a mild with four different strains of yeast.
Posted by Patrick Emerson at 10:29 AM

Man, you Oregonians need to get out more when it comes to beer... Good beer comes from the other side of Mt. Hood, too!

One of my favorite style series is the BrewDog Paradox series. They age their imperial stout in Scotch barrels. Amazing stuff.

Beer east of the Rockies? Really? I guess there is some in Colorado, but that's it as far as I am aware.

Remember that I am a poor representative of the Oregon beer blogger scene. As a full time economist and a dad, I don't get out much.

I keep trying to tell my brother-in-law about the amazing stuff coming out of Europe these days, but he stays pretty local (which, of course, is possible because Portland has so many world class brewers). We get very few Oregon beers on the east coast (Rogue, and we just got Full Sail, and that's about it), but some of the guys here match up with anything you guys can throw at us. I'd still love to see Ninkasi and Lompoc make it this way, though. For now I have to settle for enjoying it when I visit family.

I enjoy that you're a full-time economist with an interest in beer. The beer industry (and not just beer) is one of my favorite hobbies. Keep up the great work.

I'm going to agree with Patrick on this one: the brilliant stroke is selling these beers together. Mikkeller's single-hop beers are fascinating, buy you have to buy them separately--at the price of an entire six-pack. I've had a couple, I think. (Maybe Brew Dog's four-er is wildly expensive, too.)

And, if you keep livin' right, I think you have Ninkasi in your future. I know they definitely have the East Coast in their sights. Lompoc? You'd really have to be living right for that.

I suspect these are also wildly expensive (though perhaps not quite as much so as Mikkeller). Six packs of their "normal" stuff usually runs mid-teens, and you'll pay over $10 a pop for the Tokio and nearly as much for Paradox