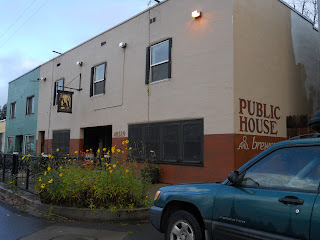 Finally, finally, finally I finish my series on the four southern and mid Willamette Valley brewing businesses I visited with Jeff Alworth in, uh, November. So today we venture back to Oakridge to visit Brewer's Union Local 180 and Ted Sobel, the publican and visionary behind what is, to my mind, the most unique brewpub in Oregon and one of the few that are a pure Oregon treasure. 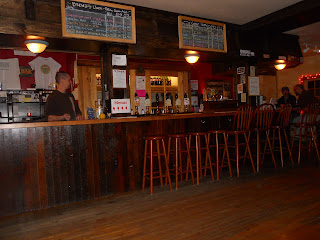 When I first heard of Ted Sobel my impression was a crazy man in the woods with a thing about real ale.  Which is basically right - you would have to be crazy to pick out Oakridge, Oregon to launch your business and he does have a thing about cask-conditioned real ale.  But he is not crazy in the sense of CAMRA purists and his passion for real ale, I soon discovered, is not out of Nazi purism but of a complete vision of what a rural, local brewing pub is and what such a place means to a community.  A vision he developed in time spent at local brewing pubs in Britain and has perfected in Oakridge. 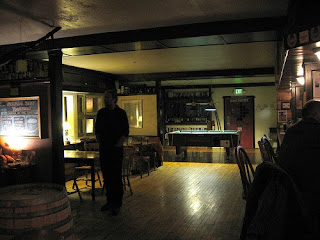 Given my own passion for cask ale, English ales and smaller beers, I eagerly sought out Ted and his beer after hearing about him, finally getting the chance to meet him and his beer last year at the Green Dragon Firkin fest (which, incidentally, is coming up again soon on April 16 and Ted will be there again I understand and of course this make the timing of this post impeccable! - there is reason to my madness after all). At the time my impression was that cask ale was his passion and his hook. But it wasn't until I visited the pub in Oakridge that I understood the beer is only part of a more complete vision of a rural, local pub that is a part and even a centerpiece of a community.

What Ted has created in Oakridge is a warm, inviting place with many nooks and crannies in which to sit, relax and chat with friends and neighbors. His brewing operation is more like a scaled up homebrewer than a fancy brewpub, but his beer is subtle and tasty and always served fresh on cask.  He has a number of guest taps and even convinces locals to send him a firkin now and again - Nick Arzner of Block 15 in Corvallis had sent a firkin of Ridgeback Red that was hooked up to one of the beer engines when we were there. 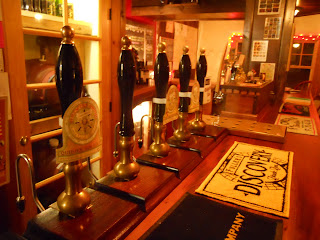 Ted finally answered a lingering question for me, which was why most beer served on cask in local bars and pubs is considered not quite legit according to the CAMRA-types. The answer is, apparently, that most breweries will take beer from a conditioning tank, put it in a firkin and then add priming sugar, much like the traditional homebrewer does, to re-activate the yeast and produce the desired carbonation. However, traditional cask ale is created by taking beer from the fermentor before it has entirely finished out, condition it, and then warm it back up to reactivate the yeast and create carbonation from the remaining sugars already present. It is an incredibly subtle distinction, but Ted's beer is done the latter - correct - way.  Despite being a purist himself, Ted is not critical of those that do it the other way - cognizant, I suppose of the realities of a brewery trying to do everything.  His fully realized vision allows him to do it the way he prefers, and that, I believe, is the point.


Ted's business suffers in the lean winter months, but then picks up when the hikers and mountain bikers return to the mountains in the spring and summer months. I was there in the cold and wet fall, and the pub was a cozy and inviting place to settle in for an evening and Ted's beer which is mostly quite small, is very sessionable - so you can settle in for and evening without feeling it the next day.  It was quiet but a number of locals wandered in and out.  The pub has no TVs so, gasp, there is naught all to do but chat.  Of course there are other diversions, stocked bookshelves, a pool table and free WiFi if you prefer the solitary amusements. 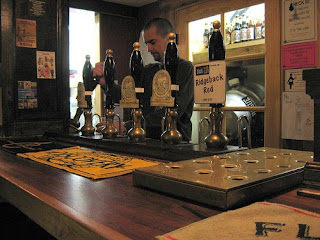 As an aficionado of fish and chips it behooves me to mention that Ted's are very, very good: moist and flaky fish in a light and well cooked batter on top of a pile of crisp chips. Excellent. I did not try the other food from the kitchen but it features very traditional British pub food such as bangers and mash as well as more American standards like burgers and reuben sandwiches. 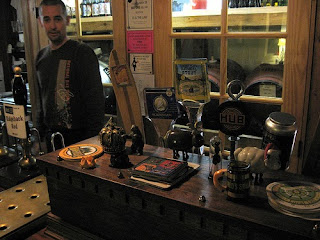 The point that I am trying to make in this whole write-up is that most reviews of brewpubs focus on the beer and then incidentally the food, ambiance and so on.  But Brewer's Union is the realization of a complete vision and all aspects - the beer, the space, the food and so on - are critical complements of each other.  Jeff and I understood the completeness of the vision when upon checking in to the Oakridge Motel and informing owner Vivian of our plan to spend the evening at Brewer's Union, she said to give her regards to everyone there.  This, I think is the point of Ted's vision - a pub that is interwoven in the social fabric of a small town.

And so even the crazy decision to open in Oakridge made sense to me in the end.  And as we left Oakridge on a typical November Oregon day - misty, wet and gray - I gazed lazily at the tops of the surrounding Cascade foothills that had gotten a dusting of snow the night before and decided the whole experience, the setting, the town and the pub, was enchanting.

As an aside, Ted and I both have a connection to Ithaca, New York (me school, he hometown, I think).  He has a nice bog post about a return home and a trip to Ithaca Beer Company (whose owners are friends of mine and whose birth I witnessed first-hand) and an old haunt: The Chapter House.
Posted by Patrick Emerson at 9:34 AM

You have promoted the sketchy origins of the OU floor to certainty. Not that I disagree with the move, but I call it bold.

If the legend gets people out there, I'm all for it.

I think the distinction between a proper cask and a non-proper cask is much more distinct than 'subtle.' If you're used to good cask beer you can easily point out a beer where the corners have been cut.

I suppose therein lies the problem. I'd love to be so exposed to cask that I could tell! Soon, soon, I can feel the momentum...

Yeah, there's a difference between "proper" CAMRA cask ale and cask ale which uses priming sugar for natural carbonation, but that distinction lies in the aging of the ale, not in the sugars used for conditioning.

Most "non-proper" cask ale has been allowed to completely ferment, then allowed to undergo secondary fermentation, giving more age, complexity, and mellowed flavors to the final product, exactly the same way homebrew is made. This is why priming sugar is used in the cask.

IMHO, cask ale allowed to undergo secondary fermentation and primed with additional sugar is actually superior to that which is casked straight from the primary fermenter. Most breweries don't have the space or time to seconadry ferment & age their beer, and thus most CAMRA-approved Real Ale is served rather "green." It's a matter of economy, not quality.

Just my opinion, but if you have the time, space, and patience, "non-proper" is the way to go.