Note: Here is the third installment of my four part series on four very different brewing businesses in the Willamette Valley. It is long delayed due to illness and work, my apologies. 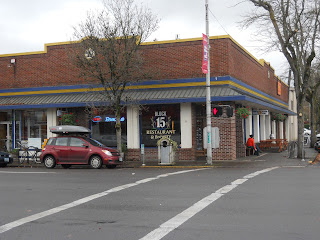 It amazed me, when I first arrived in Corvallis in 2006, that there were no brewpubs.  There was a downtown McMenamins, but I am not sure they even brewed there and if they did I never noticed.  Oregon Trail is, as far as I can tell, mostly just a hobby and the Old World Deli leaves a lot to be desired - a pub it is not.  Thus Corvallis seemed a city not only ripe for a nice brewpub but with OSU in residence, a university very much intimately involved in the beer industry - hops especially - it seemed a natural fit.  It was only in 2008, as I was preparing to move to Portland that Block 15 opened and finally Corvallis had its real brewpub.  And, predictably, it has been an immense hit.  So much so, in fact, that it has spawned another brewpub just a few blocks away: Flat Tail Brewing in the old Fox and Firkin location which will be a marvelous place to sit outdoors in the summer. 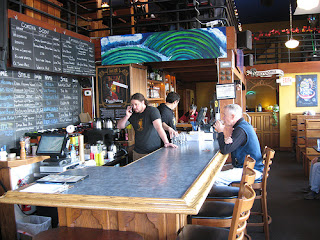 That Block 15 is a huge success is no accident, Nick Arzner, the owner had vast experience in the restaurant business and knew what it takes to make a successful restaurant.  He also was wise enough to know that his limited experience as a homebrewer was not going to cut it and so he found a veteran brewertop become the brewmaster and make sure his brewery was run right.  This also freed Nick to become the mad scientist of beer - creating a cave of barrels in which wild yeasts run free and Nick climbs about creating what just may be Oregon's finest specialty beer.  I do not say this lightly, perhaps because of his willingness to experiment, or perhaps because he just has that sense about what will make a great barrel-aged beer, Nick's concoctions are masterpieces. 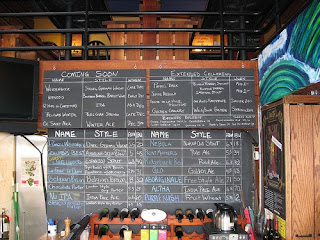 So this is a tale of a business that looks standard from the face of it - a fairly standard Oregon brewpub with good solid IPAs, Pales and Porters - but the brewpub-restaurant is actually the stable economic engine that allows founder Nick Arzner to pursue his true passion: barrel-aged and sour beers.  It is, quite frankly, an inspriation.

Of course for the model to work the rest of the business has to run smoothly and Nick's extensive restaurant background shows - the food and service are excellent.  The brewery itself runs smoothly thanks to brewer Steve Van Rossum who has extensive brewing experience at West Brothers in Eugene and at the McMenamins High Street.   Their regular beers are every bit as good as the specialty stuff and Steve is largely to thank for that.  From the start Block 15 ran smoothly and has been a roaring success since - Nick confirms that they have surpassed all business plan benchmarks comfortably.
Which, of course, frees him both physically and mentally to follow his bliss in his now quite extensive cave of barrels.  His restaurant and brew house takes up roughly one fourth of the city block but the basement now runs under an entirely other building or two and seems to go on and on and on... 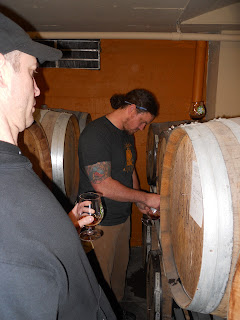 One of the coolest additions to the basement is his new, custom-fabricated koelschip.  This is a open tub to expose wort to wild yeasts.  When asked about the type of yeasts and the presence of other bacteria, Nick was unfazed.  For him it is all a part of the great experiment in beer that is his basement.

This is also true of his barrel aging process, where brettanomyces, lactobacillus and other wild yeasts and bacteria all comingle.  Some brewers are paranoid about these things to the point of not even wanting brett at all (ala Cascade), but Nick is sanguine.  If he gets cross infection, all the better and more interesting to blend in the end.  This is a man not troubled by needing his barrel experiments to add to the bottom line of the business.

But they will, I had three of the very best beers ever in his basement: Ferme de La Ville Provision, Wonka’s Wit, and La Ferme de Demons. Plus the Figgy Pudding which I was supposed to cellar, but couldn't keep my hands off around the holidays.

The ability to create a successful business and also a barrel aging program is a masterstroke.  It liberates he the barrel aging and blending master to follow his bliss and we, the punters, to benefit. By being able to fearlessly pursue his passion (and by being pretty darn exceptional at it to boot) Block 15 has become the brewery to watch in Oregon.
Posted by Patrick Emerson at 9:19 AM

Email ThisBlogThis!Share to TwitterShare to FacebookShare to Pinterest
Labels: Block 15

Whenever I visit Block 15, they seem to be about to tap something great in a month or so. I think I'm 0-for-3 in visiting and getting his barrel-aged beers.

At least his other beers are very good. I've had some superb IPAs there - a "One Hop Wonder" Sorachi Ace IPA comes to mind. The largest disappointment was a Belgian wit that overwhelmed with banana esters.

Still, as you wrote, definitely a brewery to watch with some very tasty beers, and something that was much needed in Corvallis.

Thank you for these stories. I should say that every story is unique and every decision we make when we run a business really matters. That's why I decided to use an accounting company in Singapore because it decreases the number of mistakes which are quite common for me.