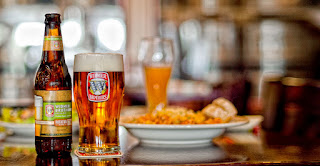 Well, in the end it wasn't even close.  Over 60% of voters chose X-114 IPA as their preferred Widmer Rotator IPA.  I tipped my hand, it was my choice too, and by a pretty clear margin.  Interestingly, the Falconer's IPA got almost no love at all, I suspected it would come in second.  It seemed to me to be on the market the shortest amount of time so perhaps folks just didn't get a chance to try it.  But it also was an old school hop bomb and I suspect that NW IPA fans these days have no become accustomed to the saturated floral and citrus aroma and flavor that, to me, typifies the best current IPAs.  Falconer's was more in your face bitter.

O'Ryely and Spiced IPA split most of the non X-114 votes.  I just had another O'Ryely the other day after seeing some in the market.  It is getting a bit old now, probably having sat in the bottle for a couple of months, but now that the weather is getting warm and sunny, it did not hit the spot, furthering my opinion that it is a great winter warmer but not a summer IPA.

I was happy to see some folks who really liked the spiced IPA come out of the woodwork.  It is a fine beer, but not one for the masses.  I give huge props to Widmer for having the guts to go to market with some more divergent beers and have enjoyed the Rotator ride.

So, Widmer: GIVE US MORE X-114!!  The weather is right, the Timbers are in season, it is time for that exceptional IPA to come back and perhaps find a permanent place in the line up.  Please.

And an aside about a Widmer/Timbers fail:  I was at the game on Saturday and bought a beer that was supposed to be Captain Shaddocks IPA as it clearly said on the tap handle.  I was excited, having not tired the beer, but expecting to like it.  What I got, however, was not Shaddocks but Spiced IPA.  Yuck.  Trying to go back to the concession line to correct this blunder was not in the cards, so I drank the Spiced IPA unhappily.  C'mon guys, this is Beer City USA, let's get some better quality control.  On the other hand, the dude at the concession line brightened up considerably when I ordered the Shaddocks and he said "oh man, I can't wait to try this myself."  So there you have Portland in a nutshell - concession dude knows and loves his craft beer.  Sweet.
Posted by Patrick Emerson at 10:15 AM

Correction: this is *not* Beer City USA. Happily we are out of the running this year!

I liked X-114 the best also, but remember how much we liked Broken Halo when it came out? And how eventually everyone sort of forgot about it? So, I won't call for the frequent return of X-114. That's the beauty of the Rotator idea, always something new.

I liked the Falconer too. It was aspirin bitter, but I liked that about it.