From Felix Salmon I learn of a paper by Liesbeth Colen and Johan Swinnen which looks at the correlation between income and beer consumption. Interestingly the authors find that the relationship is non-linear and in fact has an inverted U-shape suggesting that beer consumption rises with wealth, but then declines as richer consumers switch to things like wine and spirits.

The good news for brewers is this: 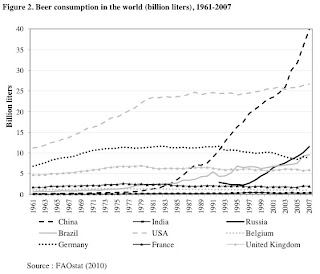 The USA 'aint doing badly either, by the way.  This is, of course good news for those that are in the business of making and selling beer (especially those in China) but it also suggests that the other shoe might fall as the emerging economies become high-income economies and switch their drinking habits to wine and spirits.

By the way, as a counterpoint to the volume graph above, note the value of alcohol consumption: 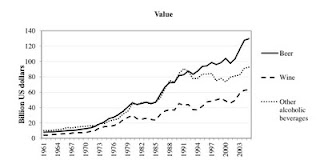 So while the volume of beer has gone up, the prices of wine have increased while volumes have remained flat and this is even more true of other alcoholic beverages.

A piece of valuable information shared. Thank you for the post.

Order online MTP kit that is the first choice of the women to deal with an unwanted pregnancy.

OnlineGenericPillRx said...
This comment has been removed by the author.
December 12, 2019 at 2:12 AM

Great post, thank you so much for sharing such a valuable information with us.
People who are facing acute and chronic pain issues can buy online nucynta for treating the same.