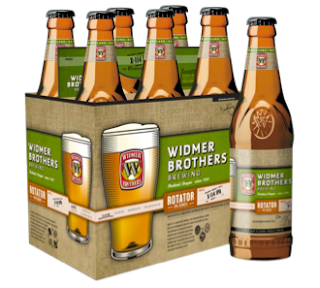 Widmer is kicking off a new series of rotating IPAs and as I understand it, the idea is to do about four a year.  I encountered the first of the series, the X-114, at my local store last night (and on sale no less).  I had sampled the X-114 a long time ago at the Gasthaus and loved it.  It is brewed with generous amounts of Citra hops and the result is quite probably my all time favorite of Widmer beers.

My first thought when I had it at the Gasthaus was 'why in the hell don't they bottle this?'  Happily they are and the product from the bottle last night was as exceptional as I remember - a stellar, balanced, northwest IPA that holds its own against the best around (Ninkasi, Bridgeport, Bear Republic, Fort George, etc.).  Not overly bitter but wonderfully aromatic and beautifully balanced with a nice even malt character.

Sadly it will give over to another IPA in a few months, but the rotator idea is great if they can keep up the quality.  IPA is the signature style of NW breweries and it'll be fun to see variants on the theme from Widmers master brewers.

But for now, go and get you some, you will not be disappointed.

[As a side note both this and Ninkasi sixers were on sale at Safeway for $7.99 and both were in short supply. In fact I grabbed the very last Ninkasi - an anecdote, yes, but I suspect the new Ninkasi sixers are selling like hotcakes]
Posted by Patrick Emerson at 12:33 PM

One thing's for sure--if any of the rotater IPAs take off, you'll see them in the permanent line. It's a pretty brilliant way to monitor customer interest. You can tell yourself how well the beer's doing. All the rotators will share the same SKU. The Widmers will plan to release them at regular intervals, but if one of the iterations is particularly popular, that batch will go fast, leaving a gap before the brothers can get the next in the series out.

As for the Ninkasi, I'm glad you saw them. I keep looking--and nada.