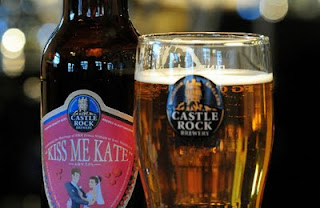 No Big Willy style after all. According to the Mirror in London:

Prince William and Kate Middleton have banned guests from drinking beer at their wedding reception.

In a move that is sure to disappoint party-loving Best Man Prince Harry, ale will not be served at Buckingham Palace after they tie the knot next Friday.

The prospect of guests downing pints has been deemed unsuitable for such a prestigious occasion.

Instead, the couple will treat their 650 guests to flutes of champagne and wine to accompany their canapés as they mingle in the palace’s 19 state rooms.

A source confirmed yesterday: “There won’t be any beer.

“Let’s face it, it isn’t really an appropriate drink to be serving in the Queen’s presence at such an occasion.

“And while the younger royals enjoy a pint from time to time, neither Kate nor William is a big beer drinker so they decided to leave it off the menu.

At least Prince Harry knows where it's at: 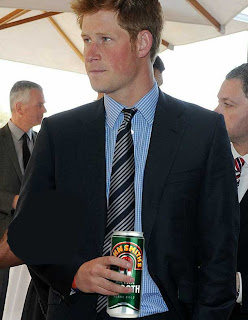 Well, perhaps not.  He is drinking a John Smith's 'Extra Smooth.'  Interesting historical footnote: John was brother to William who founded a new brewery next door in Tadcaster.  The 'Old Brewery' built  by John was subsequently passed down to his nephew, Samuel.  Too bad Harry didn't go for the Samuel Smith's Old Brewery Pale Ale which is wonderful and still brewed in the old Yorkshire Squares.

At least John Smith's has a sense of humor:

Posted by Patrick Emerson at 8:35 AM

(My word verification is "fingers." Don't think I've ever seen an actual word before.)

There are lots of funny ones, I picked my favorite of a random sample of 5.