Beer Sales Down in Europe 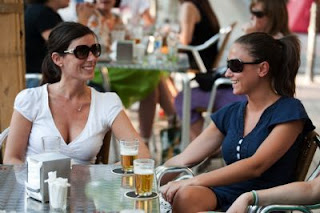 More about beer sales and the shift to home consumption and how it affects the recession from a nice post on the New York Times Economix blog:

Europeans are saving money by drinking at home rather than in pubs, which is costing jobs in the hospitality industry and depressing tax revenue, according to the study by Ernst & Young, which was paid for by the Brewers of Europe, an industry group.

The shift to home consumption has a disproportionate effect on unemployment, because 73 percent of jobs associated with the European beer industry are outside breweries. They are found instead in bars, hotels and restaurants.

‘‘Obviously, the crisis has had an effect,’’ said Pierre-Olivier Bergeron, secretary general of the Brewers of Europe.

Beer consumption in Europe fell 8 percent from 2008 to 2010, the period covered by the study. But employment in the beer industry fell by 12 percent, or 260,000 jobs, the study said. That compares with a 2 percent decline in employment for Europe as a whole.

But, never fear, craft beer will save us all:


But not all the news is bad for the brewers. Mr. Bergeron said he saw signs that a long-term decline in beer consumption in Europe, driven in part by health concerns and tougher drunken driving laws, could be coming to an end. A proliferation of microbreweries means that beer drinkers are being offered some of the variety and local character that makes wine appealing, making beer more attractive to younger, more affluent consumers.

When Mr. Bergeron joined the brewers organization a decade ago, he said, there were just 14 members from his home country of France. Today there are 80, with most of the new entrants small breweries.

Posted by Patrick Emerson at 10:04 AM