OPB on the Potential for a Bend Beer Bubble 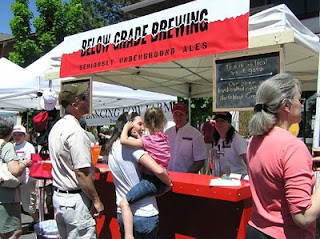 David Nogueras has a story on the many, many new breweries opening in Bend.

Residents of Bend are used to seeing bicycles on their streets, but this is something new.

The Cycle Pub, as it’s called, carries 12 peddling riders, six on each side of what’s essentially a long bar. The contraption carries the riders from brewery to brewery.

And with 10 breweries in a town of under 80,000, Bend has plenty of breweries to visit. But how many is too many?

"Today is brew day it’s a grand day here in the brewery. We always enjoy brew day because we get to smell all the beautiful aromas of the hops and grain," Barnett said.

Indeed, the air is sweet with the smell of wort. That’s the sugary extract or pre-beer yet to be fermented. This batch will eventually become an IPA -- the standard bearer of Northwest Beers. Most breweries in Bend have one. And according to Barnett most of them are really good.

"It’s awesome. You can walk down the street and have a pint of BBC, then two blocks away go to Deschutes and then four blocks away go to 10 Barrel or Boneyard. It’s great beer and we just want to add to the notoriety by brewing beer that is up to that level," Barnett said.

The question the story raises is how many is too many? True Bend is only 80,000 (or actually more like 75,000 these days), but the story points out that there are 2 million tourists that visit Bend annually.  I think there is plenty of room at the moment for these breweries - especially the ones going the brewpub route - but that for the smaller production breweries, it might get tough.

On my last visit to Bend last month I spied the Cycle Pub and went to the Northwest Crossing farmers' market where Below Grade had a booth. [No tasting notes - tasters were expensive and I am a cheapskate! Actually it was hot, smoky and 11am so I was not ready for beer] Below Grade is a basement nano-brewery and one of many that are low capital costs, but also low volume. As the name of the game is economies-of-scale I think for a lot of these smaller breweries it is grow or die. It is when all these breweries try to grow at the same time that I expect a shake-out. But heck this is the process of creative destruction that will guarantee Bend as a top spot for beer for years and years to come.
Posted by Patrick Emerson at 11:21 AM

Email ThisBlogThis!Share to TwitterShare to FacebookShare to Pinterest
Labels: Bend