Is the Weak Dollar Helping US Craft Beer Exports? 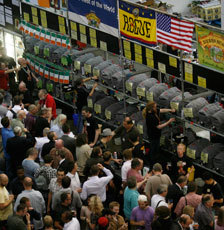 From the SMH story:

The strong Australian dollar is proving a boon to beer importers, particularly with top-of-the-range brands from Belgium and the US becoming more competitively priced.

''The state of the Aussie dollar allows everyone to receive the margins they are looking for,'' says the owner of Beer Importers & Distributors, Franck Berges. ''Where a six-pack of Sam Adams Boston Lager used to sell for around $24 to $27 in the likes of Dan Murphy's, it's now under $20.''

Berges has negotiated to import more brands from the Boston Beer Company. ''We've imported Sam Adams Boston Lager for years but we're selling a lot more these days,'' he says. ''But they've got an incredibly wide range and there's a growing interest in the whole US craft beer scene.

''We have to fit in with their production schedule but we'll start bringing in their Noble Pils, IPA and Pale Ale - which will arrive in Sydney before Christmas.''

Last year the Brewer's Association reported that US craft beer exports were up 28% by volume. I suspect that this sharp increase is continuing.

Update: Pressed for time I didn't bother to look up currency markets but did make a passing comment about the weak US dollar in general.  This is true but a reader e-mailed me to emphasize just how strong the Aussie Dollar really is these days, and he is right (and provided images to prove it - thanks for these).  Here is the US Dollar/Euro market where you can see that the USD is pretty much flat over the last three years:

Now compare this to the Australian Dollar/Euro market where the AUD is up dramatically, over 50% since the bottom of the recession in 2008/2009:

Apparently this has a lot to do with strong commodities prices, mineral wealth and close proximity to Asian markets.  But the government also pays relatively high rates to borrow money, so purchases of AUD to buy treasuries is also a factor.

I guess what this means is that the time is right to sell down under.
Posted by Patrick Emerson at 9:30 AM

Email ThisBlogThis!Share to TwitterShare to FacebookShare to Pinterest
Labels: Exports