On War and the Strength of British Beer 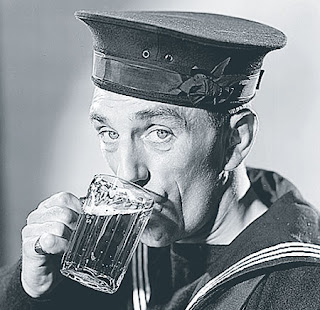 Across the pond, The Pub Curmudgeon gives us some stats from the BBPA statistical handbook:

Average strength of beer produced in the UK:

In fact, from 1950 to the end of the original gravity system in 1992, the average OG was always within the range 1036.9-1038.2, although this masked the long-term decline of mild and an offsetting reduction in the strength of bitter.

As Jeff has pointed out, wartime rationing led to the invention and popularization of the relatively low alcohol bitter and mild styles that have this aura of being ancient styles (proabably because they are British and everything British has that slightly musty aura of history turning slightly off...).  What is fascinating here is the sharp downturn around the Great War which quickly bounced back, while the low alcohol beers of the WWII era stayed.  Still nothing like the beginning of the 20th century.  For some perspective, it is hard to find a NW ale brewed below 1050 original gravity. [Alcohol content depends on the difference between OG and the finishing gravity - the sugars converted by the yeast to alcohol - but 1050 generally yields about a 5% ABV beer]
Posted by Patrick Emerson at 10:12 AM