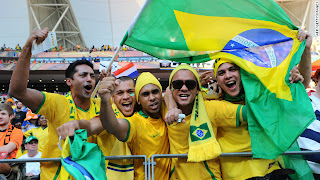 Three of my big passions: Brazil, Beer and Soccer, all come together in one new story:

Beer must be sold at all venues hosting matches in the 2014 World Cup in Brazil, football's world governing body, Fifa, has insisted.

Fifa General Secretary Jerome Valcke said the right to sell beer must be enshrined in a World Cup law the Brazilian Congress is considering.

Alcoholic drinks are currently banned at Brazilian stadiums and the country's health minister has urged Congress to maintain the ban in the new law.

Mr Valcke is visiting Brazil to press for progress on the much-delayed World Cup law.

'Won't negotiate'
Fifa has become frustrated because voting on the legislation has been held up in Congress by the dispute over alcohol sales.

The Brazilian government has also failed to resolve differences with Fifa over cut-price tickets for students and senior citizens, and demands for sponsors of the World Cup to have their trademarks protected.

"Alcoholic drinks are part of the Fifa World Cup, so we're going to have them. Excuse me if I sound a bit arrogant but that's something we won't negotiate," he said.

"The fact that we have the right to sell beer has to be a part of the law."

Alcohol was banned at Brazilian football matches in 2003 as part of attempts to tackle violence between rival football fans.

Posted by Patrick Emerson at 3:07 PM