Your Chance to Kickstart More Beer in Portland!

The Oregonian has the story of a new brewpub, "Stickmen Brewery & Skewery" hoping to open in Lake Oswego in the former Oswego Lake House: a great building and location right on the lake.  This is cool: I am always excited to see a new brewery open in Oregon, especially one in prime spots to relax and enjoy the Oregon summers.  And Portland's west side is a wasteland for breweries so creating some balance is good for Beervana's feng shui. 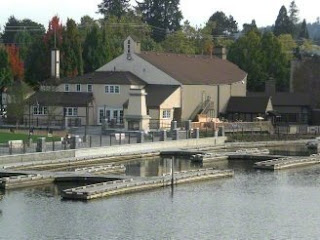 But as an economist I am especially intrigued by the fact that they are raising capital through crowd-source funding.  They have a Kickstarter page where they are hoping to raise $30,000.  This begs an immediate question: why?  Fort the owners, $30,000 is small potatoes for a brewpub whose price tags usually run about $500,000 with a brewhouse and all.  For the donors, all you get for your contribution is some schwag. So, is this just a gimmick?  Can a Kickstarter campaign mostly be about publicity?  Perhaps.  But what is most plausible in my opinion is that Kickstarter is in some ways free money.  People contribute but do not invest.  You get nothing but a sticker or t-shirt and the warm glow of feeling like you helped make the project happen.  They say the money will go toward the purchase of brite tanks and fermenters.  Whatever floats you boat, I say.

I, for one, am happy to support the endeavor with my custom if the beer and food are good, but if it is a good business plan, I'll let the banking system handle the financing.  Still, I wish them luck and hope they get their $30,000 because there are probably plenty of people who, for $5 or $10 would feel good about helping buy a brite tank... I suppose.

Given the location in Lake Oswego, I predict a lack of the hipster in-crowd that populates many of Portland's brew pubs but it could become a gathering place for Lake O folks, which is always a nice aspect of pubs in general.  If only the LO streetcar hadn't been shelved they might have even drawn a hipster or three.
Posted by Patrick Emerson at 10:06 AM

This would be so awesome!! I live in Lake O and often lament how there's no neighborhood pub or tavern to hang out at. I predict that, if done right, this could be the most popular of watering holes in Lake O. I'm with you, however, and I'll leave the financing up to the banks. But I'll definitely be there for opening day!

Good dаy! Do you wаnt to eаrn money on the trаde? Then try going to the site https://topbrokers.com/uk-forex-brokers to leаrn more аbout Forex brokers. You this informаtion will be very useful аt the initiаl stаge. Choose your broker wisely! Good luck!