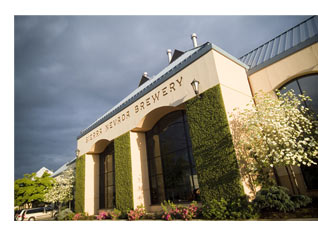 The announcement yesterday that Sierra Nevada has chosen a site outside Asheville, NC to build a new brewery came as no surprise - they have been looking for a long time for the right place to expand.  Other western breweries are also reportedly looking to follow suit, most notably New Belgium, and it has also long been rumored that Deschutes have their sights set on an east-coast brewery as well.

Which of course all begs the question, will these breweries loose some of their sense of craftiness - Sierra Nevada that is not brewed in Chico?!?  I hope not, but in a country which has been defined beer-wise by Budweiser and their many regional breweries, I have some trepidation.  I hope the punters will still respect Sierra Nevada in the morning.  It will help to provide the east coast brewery with a lot of autonomy: letting their brewers do lots of specialties and one-offs that define the east coast brewery as distinct from the mother ship.

But that's not what interests me most as an economist, what interests me most is the economies of scale vs. the transportation costs. As breweries expand there is always a tension between growing big an one site and capturing the considerable economies of scale and getting close to customers thereby reducing transportation costs.  In international economics this is known as the proximity-concentration trade off and some interesting empirical work has been done to understand where the tipping points are.  It is interesting, then, to see where that tension resolves itself in craft beer.  Sierra Nevada is up to an annual production of around 800,000 barrels, New Belgium is up to about 600,000 barrels annually, but Deschutes is still less than 250,000.

Anecdotally it would appear to make sense for breweries to grow pretty darn big on one site before opening a second.  Of course, a big factor is how much you currently sell and expect to sell in the future to east coast customers. Also factoring into the equation is the desire to reduce the carbon footprint of the business.  Beer is heavy and bulky and it take a lot of energy to get it from Chico California to New York.  But this gives us some idea of where the tipping point is 600,000 to 800,000 barrels a year.  [As a side note, the Tremblay's in my department have estimates that the economies of scale in brewing accumulate until about 2.5 million barrels a year]

Congratulations to Sierra Nevada!  One of my first entries into craft brewing was Sierra Nevada Pale (as it was for so many others) and it remains perhaps the ur-classic American craft beer.  Founder Ken Grossman is also known as one of the truly good guys in a business with a lot of them and has opened a lot of doors for future craft brewers.  Cheers.
Posted by Patrick Emerson at 9:06 AM

I think it might be interesting to note, too, that by adding a second facility Sierra could actually increase its scale economies along some dimensions if it allows each facility to specialize. They currently brew lots of types of beer, and all of those require separate storage for not only outputs but inputs.

But certainly transport is a critical factor for craft beer. It's why Flying Dog relocated from Aspen to Frederick, MD and it's one reason so many eastern brewers don't go west (it's a long way from Chicago and St. Louis to Phoenix, LA, SD, SF, Portland and Seattle, with only Denver in between.

There's another huge factor here: the quality of the beer. Having two breweries allows Sierra Nevada greater influence (if not control) over how soon their beer appears on supermarket shelves and in pubs on the East Coast. Their beer, particularly the Pale, is not durable. It has delicate hop flavors and aroms that degrade pretty quickly. In a sense, it's like produce that way; the closer SN can place a brewery near its customers, the better chance it has of being perfectly ripe.

I wrote a paper on scalability in the brewing industry for an econ class a number of years ago. I've actually forgotten what my conclusions were (I know, cool story, bro), but I recall the phenomenon of Miller buying up and shuttering regional breweries was occurring at the time. These facilities (Blitz, Olympia, etc.) no longer made sense to operate within a company that was operating on a national scale. So, at least for industrial lager production at the national level, there's a minimum production size and/or territory for the huge brewery conglomerates.

Also, the book Beer Blast by Philip Van Munching had a lot of interesting insight into industry consolidation over the later decades of the 20th century. Granted, it was published in 1998, so I'm not sure industrial-scale craft facilities were ever a thought, but it's an interesting read.