Greene King and A Brief History of British Beer: Part 1

Note: I recently had a chance to tag along to some British breweries with Jeff Alworth of Beervana who was researching for a book he is writing about beer: The Beer Bible.  What follows is an essay on my impression of the recent history of British beer and the current state of craft beer in Britain.  Unlike Jeff's book this is not meticulously researched but based on impressions, conversations and a few facts gleaned along the way.  I think I have got it mostly right, but I am happy to hear comments, corrections and criticisms.  Those looking for meticulous detail can go to the Brewery History Society and/or seek out the excellent writings of Cornell and Pattinson. It is a log essay and I have broken it up into seven parts which I will post over the next week.
_____________

To understand the history of the British beer industry, including the new resurgence of traditional ‘craft’ ale, a good place to start is the Greene King Brewery. 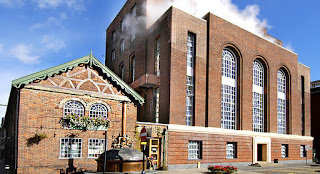 Greene King towers above the tidy little town of Bury St Edmonds in west Suffolk, England, about 60 miles to the northeast of London. When you arrive in the Brewery, one of the first things you notice - inlaid into the old stone façade of the old brewery building - is the company crest and the date 1799: the date the brewery began brewing on the site. The old brewery building is quite small but has been added on and enlarged through the centuries and today the whole green King complex is quite extensive, though you don’t realize it immediately. 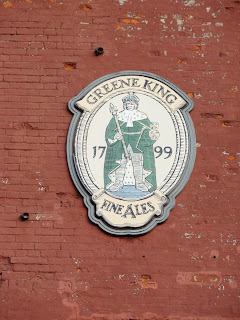 The brewery itself towers above Bury quite literally: it is a traditional tower design which uses gravity and greatly reduces the amount of pumping of liquid that must be accomplished – a tremendous advantage in the early days of mechanization and steam power.  Greene King also towers over the town figuratively: it is the town’s largest employer and occupies an extensive network of properties near the center of town. 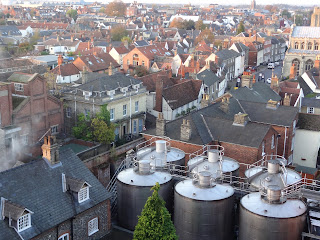 How Greene King got to be such a large brewery is a story of perseverance, acquisition and the renaissance in traditional ‘real ale’ in Britain.  But is it also a story of resentment and fear that Greene King, the largest keeper of the ‘real ale’ flame, is unworthy to carry the flame forward.  And interspersed with the story of Greene King is the story of the influence of the American craft beer renaissance - which has established a foothold in Britain and has created another outlet for craft beer enthusiasts.
Posted by Patrick Emerson at 9:00 AM