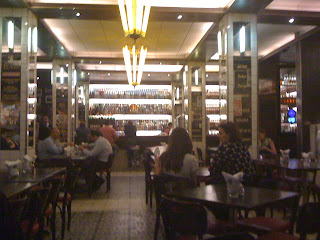 I am in São Paulo, Brazil for a week to conduct research on child labor (I do occasionally dabble in economics when not writing about beer). There is not much to say about beer in Brazil, but my Paulista friends say there is a new micro-brewery called "Colorado" (not Oregon - for shame!) in a town outside of São Paulo, Ribeirão Preto, too far probably to fit in on this visit.  In the meantime, I went to the Astor bar in the Vila Madalena neighborhood and had a few 'chopp's (the amusing term for draught beer in Brazil).  The Astor is a Brahma tied house and so the beer selection is copious: you can choose among the Brahama claro (a light pilsner) or the Brahma oscuro (a dark beer which seems suspiciously like the claro with some caramel color and some added sugar).  Both are served on nitro and sport creamy heads.  You can also have it served 'Paulista' style with a claro pour and then and ocsuro head or 'Carioca' style with the opposite.  Since I am in SP, I chose Paulista.  Once you start, watch out, because they swoop on almost empty glasses and replace them with full ones before you even notice save for the pile of coasters that are accumulating which is how they keep track of your tab, sushi-bar style.

The beer is bad, but the bar is great, the neighborhood charming and the wait staff very friendly.

The good news for Brazilian beer lovers is this Colorado stuff looks promising, they have an imperial stout named "Ithaca" and here is a 7% ABV IPA to warm the hearts and gullets of Oregonians.  I'll try and find some in the local store. 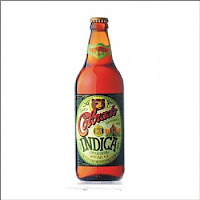 Posted by Patrick Emerson at 7:07 PM

Email ThisBlogThis!Share to TwitterShare to FacebookShare to Pinterest
Labels: Brazil

Brazilian beer tends to be light and we don't have as many choices as there are available in the US. Here is a good review of different Brazilian beers, including a couple of delicious relatively new beers:
http://bit.ly/euhJ32

The old Cornell grad makes a Freudian slip. It's not "Ithaca," I don't think, but Indica--anyway, judging by the label. But go Big Red.mica

No there is another beer - an Imperial Porter called Ithaca. http://www.cervejariacolorado.com.br/home.php

Hi Patrick! With all due respect, you better inform yourself before saying something like "There is not much to say about beer in Brazil". Unfortunately your brazilian friend doesn't have a clue about craft beer and gave you the wrong idea about beers in our country. Our market is dominated by the BCB's (brazilian corn beers) but we have plenty microbreweries and craft breweries like Colorado and the world awarded Bamberg Bier.

Please spend 2 minutes of your time by checking out this ranking of brazilian beers, ordered by the highest evaluations:

You'll see that we have A LOT of beers better ranked than Brahma! And if you have two more minutes please read this article by Stephen Beaumont about our national beer festival:

Please don't take me bad, I'm just trying to fix the wrong idea you got from our country. Next time you come to Brazil give me a call and you'll taste some really good beers!

Patrick, I just realized you still here in São Paulo. Please try to visit the Melogranos Forneria before you left, it's on the same neighborhood than Astor. Melograno is a beer specialized bar and I'm sure you'll drink excellent brazilian beers there. This bar completed two years of existence yesterday and the owner brewed a commemorative belgian style beer called Due.

No, I don't think you are bad, just the opposite - I really appreciate the links and the information. You are absolutely correct, my friends don't know anything about craft beer in Brazil. And you are right to complain about my blanket statement about there being not much to say about beer in Brazil.

Better to say that in most bars and restaurants in Brazil you get what you call the BCB.

And, by the way, Brahma beer might not be the best, but the Astor was cool and I liked my Paulista style chopp.

And special thanks for the good tip on Melograno. I will try and visit. Do you have a tip for a good place to go in Jardins? I am staying in the neighborhood and it would be great to know where to go nearby.

Hi Patrick,
How are you?

some places around Jardins with brazilian craft beers

there are another pubs in this area, but not with brazilian craft beers.

you´ll stay here all week?
if you need something, write me:
allbeersbr@gmail.com

This is an interesting mirror. Perhaps someone from Europe visiting the US would conclude what you have--that the beer of the US totally blows. He'd be right, of course; 90% of the beer does blow.

Fortunately, you have a beer blog and now you know of a lot of interesting breweries to check out. On earlier trips, you just wandered the wilderness...

In modernity, most RMA requests are completed through the Internet, so having the ability
to process RMAs has become reviews a crucial aspect of the tech world. Upon receiving the
initial request, the representative, aided by the help of reverse logistics technology.
become reviews