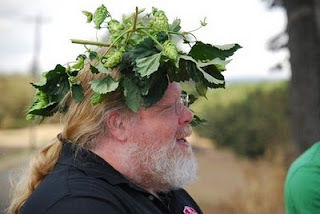 John Harris, King Lupulin
It is all in the hips, baby! No, seriously. John Harris, brewmaster at Full Sail, is the godfather of brewing in Beervana. His fingerprints are all over a number of Northwest classics, perhaps most prominently is Deschutes' Mirror Pond Pale Ale.  I was asked once what my favorite beer was and I demurred, how could I pick just one beer?  But, if I had to commit to only one beer in my fridge for the rest of my life, I'd probably pick Mirror Pond. It is perfect and can go with about any food, any season any mood.  It has an amazing hop note yet isn't aggressively bitter and the malt body is sublime.  And it is a flagship of Deschutes - it and Black Butte Porter (which I think is also a Harris creation) are the two Deschutes beers you are almost always bound to find where the beer is sold.  I don't know how much of Deschutes sales are accounted for by Mirror Pond, but it is a lot.

A few years ago I posted about the idea that the difference in skill among brewmasters is small, but that tiny difference can yield outsized returns, and thus John Harris' true worth is likely to be gigantic. But I didn't really flush out the idea (though I had in an economic post).  So the answer to the question in the title is that what makes John Harris like a pop diva is that his talents are both rare and reproducible.  Like Lady Gaga, who records her talent, reproduces it and sells it globally, a brewers art can be reproduced and sold indefinitely. This process suddenly makes that little difference in talent a huge revenue advantage over other brewers.  Which is why we see such outsized returns for those at the very top of professions where such scarcity and reproducibility exist.

Mirror Pond is just that much better than other beers in a crowded marketplace.  And once John perfected the recipe, Mirror Pond could be made, essentially the same, forever.  Deschutes has built, and continues to build, an empire off its early recipes which John created.   In fact, the mind boggles to think about the present discounted value of the revenue stream Mirror Pond will be responsible for when all is said and done.  Deschutes is on the road to becoming a national craft brewer like Boston Brewing or Sierra Nevada, all on the shoulders of Harris.

This is not to discount the skilled helmsman ship of Gary Fish or others involved in the business side, you can (and economist's do) make the same claim about top CEO salaries: their talents are not reproducible but a marginal difference in talent can mean billion dollars differences in outcomes.

Which all raises the question, why are top brewmasters not paid huge salaries?  One reason my be that their talents are really not that rare - many skilled brewers are out there and so the supply of good brewers brings the price down. It is certainly true that many good brewers are out there and want jobs, but the point is that being good isn't enough, you have to be one of the best.

I actually think the problem is an inference problem: one assumes Deschutes would have done just as well without Harris, after all they are thriving now and surely another skilled brewer could have come up with fine recipes.   But this is a classic problem of making inference where there is selection.  A brewery that did not choose a brewer wisely would probably no longer exist and the memory of the failed attempt soon forgotten.  In fact, the very best breweries are probably those that had and hoarded good talent either by accident or design.   Failing to recognize this will probably doom many nascent breweries but the lesson will not be learned.

I also think that many top brewers are figuring out this market failure for themselves and correcting it by opening their own breweries, where the market returns come to them - think Jamie Floyd at Ninkasi.  but these brewers will have to realize that good business acumen is a little scarce too and understand that they need to pay for it in a curious market reversal (think Ninkasi v. Roots).  Perhaps John Harris himself made this calculation when he went to Full Sail where he is an employee-owner.

Maybe Harris cannot tickle the eyes and ears like Lada Gaga, but he sure can excite the nose and tastebuds.  And besides, Lady Gaga is going to get old and tired, Mirror Pond won't.
Posted by Patrick Emerson at 11:49 AM

Interestingly enough, brewers like Sam Caglione, Greg Koch, and Vinnie Cilurzo do have rockstar like followings, and would be seemingly impossible to replace. Don't know what they are paid, but you would have to think the worth of their breweries would plunge dramatically if they left for whatever reason.

Even when well reguarded brewer Steve Altimari left not all that well known Valley Brewing in Stockton, CA this year, Valley Brewing's reputation took a big hit, and most likely their sales followed.