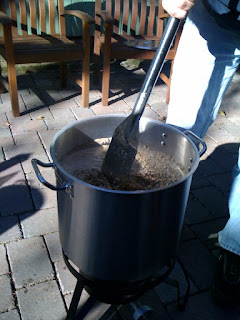 Doughing in
A while back I wrote a lengthy post about my first disastrous attempt at all-grain brewing.  Surprisingly the finished product from that comedy of errors is quite enjoyable.  It has some residual sugars that didn't ferment thanks to our mash temp going way too high too soon, but we also hopped the heck out of it so the result is actually quite balanced and the hop note is fabulous.  So it is probably the worlds first 3% ABV hop bomb.  Weird but kinda nice.   By the way, such failure does not warrant the moniker THE HOPOPOTAMUS, and as we were worried that it was just going to be a thin beer with an enormous amount of hops, we decided to christen it the FIRE-BREATHING DRAGON!  [This after considering and rejecting 'Chemical Burn' and 'Shock and Awe']

Still, it was time to get back in the saddle and after much consultation with my baby brother, the pro (and a graduate of UC Davis's Master Brewer Program and an IBD certified Master Brewer) I thought I was ready to do it again. Nice to have an expert in the family. I guess I should note that absent my own hubris I would have had a long conversation with my brother prior to doing the first one which might have headed off many of my problems - thought it is hard to anticipate things you have no experience with.  I am not sure that in the end such a strategy would have been better as failure is very, very instructive.  And doing it all right the first time inevitably leads to questions of whether it is all really necessary and whether some corners could be cut, etc.  Nothing quite like learning by doing...

Anyway, the prospect of the last great day of the season induced The Beerax and me to brew.  So we came up with what we thought would be a perfect beer for the season: a nice porter (a little extra hopped because we are, after all, in the NW).  So we ran off to Steinbarts again and were a-ready to roll.

So here were the adjustments I made which I share in case others out there are ready to give it a try: 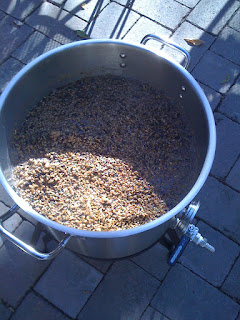 The mash
-My prized and overly fancy mash tun is quite wide and has a false bottom that is about an inch and a half off of the bottom of the kettle.  When figuring the appropriate amount of water I need (roughly one quart per pound of grist) to figure it as in addition to the water below the false bottom.   A little test revealed that this area contains 1.75 gallons of water!  So my original mash was way low in water volume.

-My original strike temperature (heat of the water before you dump in the grain) was 165 degrees, my brother suggested that 175 would have been better for my last beer.  For this beer, given its lower grist volume, we went for about 172.   This ended up being spot-on and we mashed beautifully at our ideal 150 degrees.

-My brother urged us to vorlauf (recirculate the mash water by draining off the bottom and slowly pouring it on top of the grain bed) slow and long.  We did it for about 20-25 minutes.  Previously we drained about two quarts off until it seemed clear and then dumped the thing back in and called it good.

-My brother also urged going very slow on the sparging (adding fresh hot water to rinse the grain) and draining the mashing out at the same rate as the sparge water was coming in. We increased the sparge water temp at the advice of the bro to 175.  Last time we drained and sparged very quickly (in about 5 minutes).  This time we sparged for 30 minutes. 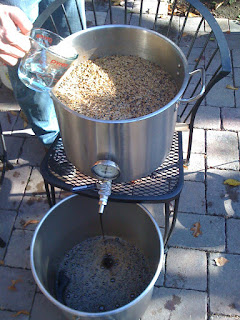 Sparging ... slowly
-Previously we lost a startling amount of liquid in the boil, partly this was due to loose hops we figured (and the sheer volume of hops) but we also thought (and my bother agreed) that we underestimated evaporation.  This time we figured for one gallon loss rather than the half gallon we had before.  We also increased our estimate of water loss from the hops.

-Final advice from my brother: increase the amount of grain by about a pound because you can always add water if your OG is too high, but if it is too low you have no recourse.

So what was the result? Almost a complete success, our mash efficiency was spot-on and the wort and hops additions appeared just about perfect.  Our only problem was that we did not loose the amount of water we thought we would and so our sparge water calculation was too high.  This might be because we boiled in a narrower pot, and thus the loss due to evaporation was less?  Anyone know if this difference could have a significant effect?  We did adjust our grain bill by adding an extra half pound but in retrospect we should have probably done a full pound extra as the bro suggested.

We also put our hops in a nylong bag this time rather than using the mash tun as a hopback which I think means a lot less water is lost through the water retention of the hops.  Maybe loose hops also increase the surface evaporation?  Anyway, we ended up with a lower OG than we were targeting and out final result will be a bit too light.  Dang.  Still, I consider it a huge success with only one final little wrinkle to iron out.   It will still be a good beer, just not quite perfect.

By the way, my brother now brews for Summit in St. Paul, Minnesota check it out when you are in the area.
Posted by Patrick Emerson at 10:38 AM

Brewdog actually beat you to the low alcohol hop bomb with their Nanny State. Granted, it tastes like drinking dry hopped soda water, so yours might actually be the first one that's drinkable!

Our is pure genius: by completely f*#%ing up the mash we created the perfect 3.2 beer (can be sold in supermarkets in places like Colorado). When I asked a brewer at a major Colorado brewery what they do to make 3.2 beer he said, with a smirk, "we just add water."

In my short life as a homebrewer (15 months, 6-7 batches) a couple of my "comedy of errors" brews turned out to be the best tasting ones. Funny how things work out that way.

You know, professor, sometimes silence is a virtue.

Besides I am not ashamed of my missteps it is all a part of the learning process. Something I am always trying to tell my students who seem to get outraged these days if a problem set is particularly challenging. It is okay to try and fail as long as you learn in the process.

Now outing you was gratuitous and unnecessary, but fun. And with your "near poetic prose" I can't imagine it troubling you. Besides, it is my new system and as such the learning curve does not reflect poorly on your genius.

Now, your own home brew is another matter...