How to Brew Beer after the Apocalypse

And so why not build a floating brewery and bring it to them?  Genius. 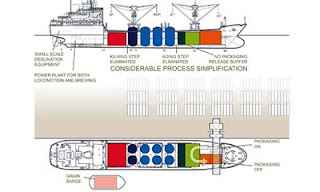 Okay so this is actually all notional, but hey, a brewery ship is cool nontheless.

SABMiller has predicted how its breweries may look in the future, given a range of different scenarios determined by the cost and availability of water and energy.

Working with innovation consultancy, Innovia Technology, SABMiller envisioned four plausible business environments, based on the different uncertainties facing the brewing industry over the next 30 years. These scenarios informed thinking around how the "Brewery of the Future" might look under different circumstances, with some surprising results.

The most extreme scenario, Marginal Surviva, envisaged a market with limited access to water and high energy costs. This scenario – where people would migrate from areas of water shortage or turbulent weather – provoked the most unorthodox response. One of the proposed solutions was a smaller, mobile brewery which would move from place to place on the back of a ship.

Rob Wilkinson, Director of Innovia, said: "The descriptions are intended as food for thought rather than as blueprints for building new facilities. However, the example of the brewery on a ship is entirely feasible. It would allow for rapid entry to new markets, especially where no infrastructure is in place. It would also provide flexibility in positioning and length of stay and allow SABMiller to move with water sources, with people, with crops, or even away from severe weather, natural disasters or political instability."

Maurice Egan, SABMiller's group head of manufacturing said: "While this research has produced some imaginative solutions, the business case behind the thinking is very serious. We need to ensure that, given the rapid pace of technological developments, the impacts of climate change and growing wealth in developing economies, SABMiller has the capability to define, design and deploy our future breweries and supply chains."

Posted by Patrick Emerson at 8:30 AM

Email ThisBlogThis!Share to TwitterShare to FacebookShare to Pinterest
Labels: SABMiller