Does Supply Create Its Own Demand?

NOTE: Another one from the archives of the Oregon Economics Blog, this one from April 2008. 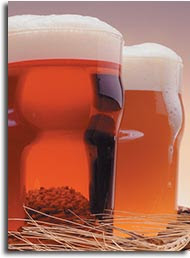 I am a little late to jump on this, but a while back the Oregon Brewer's Guild released figures that showed the volume of beer produced in Oregon has increased substantially. I will outsource the data analysis to Beervana.

This raises an economics question I have asked in a lot of different ways in this blog: why is the brewing industry in Oregon so robust and why can so many brewpubs survive in a market like Portland?

Perhaps it is a set of exogenous 'fundamentals' (in economist-speak): Maybe Oregonians are predisposed to like beer more than others, and want to drink it fresh in a pub because of some genetic quirk. Perhaps the climate is conducive to not only beer consumption but pub crawling. Maybe it is the fact that we are in a hops producing region. I have no doubt that in each explanation one can come up with along these lines lies a grain of truth, but I can also just as easily imagine lots of other places with similar characteristics but which don't have nearly the beer culture we have here.

This leads me to believe more in endogenous explanations than fundamentals. I think palates and pub culture are created not inherent. I think that the early introduction of such places as BridgePort and McMenamins had the effect of starting a small ball rolling that slowly began to get bigger and bigger. In effect, I think that the supply of micro-brewers and brewpubs created the demand for even more. I also think it was important that the beer started as available primarily in brewpubs - that it was hard to find the beer in the stores. This promoted the pub going culture that so typifies Portland and many other Oregon communities today.

This is not a new idea in economics, there are many goods for which demand increases after consumers learn about its presence by seeing it in stores, think the Nintendo Wii - the demand keeps grouting as more and more people experience it.

I think this can also be related to Network Externalities. This is the idea that the value you get from consuming a product goes up the more that others consume it. (Thus the externality - the benefit from one consumer's purchase of a good that accrues to another consumer) Think about telephones, the very first owner of a telephone probably didn't get a lot of value out of it until all his/her friends got them as well.

How do network externalities fit in with the Oregon microbrewer and brewpub scene? Well, for bottlers, the more that consumers buy craft beer in general, the more retailers will be willing to give up shelf space and taps to microbrew. Thus, one person's purchase of craft beer benefits others by making more available to choose from. For brewpubs it is the same story, the more people frequent brewpubs the better the atmosphere and the greater the variety of the beer offerings.

It is also likely that these effects are not proportional: they might have been small to begin with, but may have snowballed as time passed and have reached a type of critical mass that creates a true, unique culture.

So here is the punchline: Portland (and Oregon in general) may have a substantial advantage over other cities as a place to start a new brewery/brewpub despite the fact that there is so much competition. In fact it may be because there is so much competition that Portland is a great place to start a new pub. Just ask Christian Ettinger of Hopworks Urban Brewery which is off to a roaring start. Sometimes a little competition can be a good thing.
Posted by Patrick Emerson at 1:11 PM

Good thoughts and read.
This point seems to have been written about a lot lately and I think there's one main thought that's often left out. A brewery as we see it is often just a restaurant that makes their own beer. Most of the brewpubs here (or anywhere else) get a high percentage of their revenue from onsite food and drink sales. Typically upwards of 70% or more.

There are tens of thousands of new restaurants opened in the US annually. Should we be surprised that a small percentage of these make their own "drinks" and sell a bit around town? I don't think so.

I think most people love new restaurants. I also think most people (especially in the PNW) love trying new beer. Put the two together and throw in other key ingredients and one has the making of a successful new brewpub/brewery/business.

I wish them all success.