A while back while writing about the beer and brand that is Black Star I commented on the sort-of tangential relationship it has to The Great Northern Brewing Company (GNBC) in Whitefish, Montana.  I lamented that it was not possible for this Oregonian to try the myriad of other beers GNBC brews. 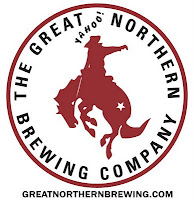 Well, the good folks at GNBC noticed and decided to take it upon themselves to rectify the problem by sending me a little care package with a couple of their more special beers.  I was delighted to receive them straight from the Flathead Valley, and you can read my take on the beer with this felicitous acquisition in mind.

By the way, the internets tell me that Whitefish, MT emerged as a proper town with the arrival of the Great Northern Railway, and thus the provenance of the brewery's name is established - and it is pretty cool.  It is a really beautiful facility and the pub looks pretty spectacular as well.  But its location is truly remarkable, in northwest Montana right on the doorstep of Glacier National Park.  Wow.

Another cool thing about their location is that it is suitable for hops cultivation: warm, dry and long summer days.  Makes sense given the northerly location and the arid Inter-mountain West climate.  Which explains the first beer they sent: the Frog Hop Fresh Hopped Pale Ale.  This beer used hops grown a couple of miles from their brewery at a farm called Purple Frog Gardens which explains the name Frog Hop.  The brewery staff went and picked the hopes themselves and they were added to the kettle within 24 hours of harvest. 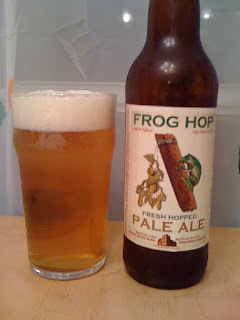 Unlike NW fresh hop ales that generally use one or two hop varieties, GNBC used four: Mt. Hood, Chinook, Nugget and Cascade.  It was a cool and wet summer in Whitefish this year and so the hops did not fully develop.  The brewery believes that this left the alpha acid content low, but did not want to add dried bittering hops to correct this.  I applaud this decision as to me the point of fresh hop beers is not fantastic, well-engineered beers, but different, earthy and unique beers.  It is also important to note that it is now November and the subtleties of the fresh hops are sure to have diminished with so much time in the bottle (which is also okay - another thing I like about fresh hop beers is that the exist in a specific place and time).

The beer is a truly different sort of fresh hop ale than what we typically see locally.  It has a lively pour (it is bottle conditioned) and produces a wonderfully creamy head which it retains admirably.  It is very light bodied and is a golden/straw color (the picture actually does a good job of showing this).  The nose is very subtle, the material describing it mentioned grassy aromas which you expect from fresh hops, but in this bottle they had become very faint.  Amazingly perhaps my first thought upon tasting this was 'pilsner.'  This thought never left.  The hops are very subtle, but balanced nicely by the very light body.  This stuff is hard to judge, but they produced a wonderfully balances, very light ale that distinctly resembles a cross between a light NW ale and a Czech Pilsner.  How this could be true given the NW hops and ale yeast is not clear to me but the result is quite wonderful.  I do not know what NW hop heads would have said of this beer were it in one of the fresh hop fests, they probably would not have though it as good as the hop bombs, but I think all would agree that it is a finely crafted beer.  This is a 5.1% ABV and I am guessing IBUs in the thirties.  On a hot summer day, a sure winner. 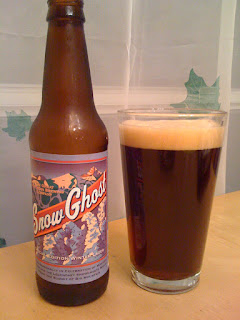 If the fresh hop beer was a last vestige of the summer now past, the other beer was a perfect welcome to winter beer: the Snow Ghost Winter Lager.  Now, I am a big fan of lagers and lament their rarity in the Northwest and the idea of something other than a winter ale is quite appealing.  I'll also state at the outset that while I am a big fan of winter beers, I take them in moderation finding many to be a bit overbearing.  My NW favorites are the classics: Jubelale and Wassail.

Snow ghost immediately evokes Samuel Adams' Winter Lager (which I haven't had recently and will not try to compare).  But Snow Ghost is another beautiful GNBC beer: a rich creamy and tawny head on top of a dark reddish brown body (this beer is also bottle conditioned.  It has a strong malt presence and a subdued hop note, like an Octoberfest on steroids but not quite a dopplebock. I immediately smelled and tasted the roasted malts along with a hint of chocolate and caramel and like a typical lager it as creamy and smooth.  If I were in charge, I would amp up the hops but I am in incorrigible hop-head and don't like malt forward beers as much, for example, I am not a big fan of Scottish ales.  This beer is not spiced, so the winter warmth comes from the roasted malts and gentle spice of the Aurora and East Kent Goldings hops.  Again, like Frog Hop a superbly crafted beer without an off note and very, very well balanced.  The literature identifies this as a 6.3% ABV beer (the website say 5.9% with 34 IBUs).

It is good to know what goes on beyond the borders of Oregon and Washington, and I am very happy to report that, based on these first experiences, Great Northern Brewing Company crafts exceptionally well-mad beers that represent a slightly different beer culture: beautiful lagers and not as hop-crazy ales.  I can't wait to take the Amtrak to Whitefish and give them a visit.
Posted by Patrick Emerson at 2:20 PM