Two Notes from Down Under: Free Beer and iPhone Beer Tasting App 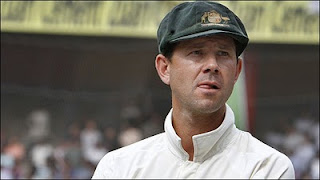 Ricky Ponting is ... thirsty (AP).
In Australia they are gearing up for the biennial Ashes cricket tournament with England.  This is a competition that has been contested since 1882.  In recent decades, Australia has been the dominant side, but in 2005 in a now legendary Ashes played on British soil, England came back from the dead after being thrashed by the Aussies in the first test to win back the Ashes for the first time in 18 years.  Australia won the Ashes back at home in '06-'07 and England returned the favor in Britain in 2009.& (The dates are not every two years due to the hemispherical juxtaposition)

Now England and Australia are gearing up once again to contest the Ashes down under and for the first time in recent memory, England are thought to have a real chance at claiming their first Ashes on Aussie soil in over 20 years.

So to fire up the Australian fans local beer producer Victoria Bitter has promised each and every adult Australian a free beer if Australia wins the Ashes. How much beer is this? Well, there are 13 million adult Australians ...

And lest you think that in the modern era cricket is an anachronism - I think 1.2 billion crazed Indian cricket fans would disagree. It is actually a pretty fun sport to watch but I prefer the World Cup limited-overs version (sacrilege, I know) where matches last a reasonable 2-3 hours.  I can't quite get into the 5 day test match thing.

In other Aussie beer news:

MELBOURNE: Australia's oldest existing brewery, Cascade in Tasmania, has developed a world-first iPhone application that allows beer-lovers to scan and get tasting notes on nearly 500 beers, as well as track what beers their friends are drinking and where.

The Carlton & United Breweries brand has been working on the application with ad agency Droga 5 for several months and has listed nearly 500 beers.

Awaiting approval by Apple, the application is expected to be available free within the next fortnight, and industry observers predict it will be a hit not only in Australia, but also around the world.

The Brewer's Nose app lets users scan a beer's barcode using the iPhone's camera, bringing up a description of the beer, a video explanation of one of the 32 different styles from a brewer and a video suggestion from an independent chef on food matches.

Drinkers can add their own tasting notes and post them on Facebook. The application also lets them geo-tag were they tasted the beer and at what time - potentially revealing the depth of some people's affection for the fluid.

This is interesting in light of my post on social media and the comments about how some aspects of new media, like on-line review sites, reduce the experience good aspect of beer - allowing you more information about beer before you try it. Still, whether a beer tastes good is a personal judgment and this you only know once the beer hits the nose and mouth.  A good label on a beer should give you the essential information about the style, but quick access to consumer reviews could be helpful.

Finally, and gratuitously, I leave you with this tribute to my fellow academics in Australia, who could use a free beer, no doubt.

Posted by Patrick Emerson at 9:18 AM

If you're a fan of limited overs cricket, you would probably also enjoy 20/20 cricket which is a further abbreviated version of the one-day game. As the name suggests each innings consists of only 20 overs each as opposed to the 50 in one-day cricket. It has become hugely popular in India with the Indian Premier League, and is taking the cricketing world by storm.

However, in saying that for the cricketing purists you can't go past test match cricket and as such bring on the Ashes!

For an interesting look at the Australian craft beer scene you should check out our blog at: http://www.beercartel.com.au/blog.php.