A Brewpub in the Neighborhood

From Ezra at The New School I learn the facts about rumors that have been swirling about in my neighborhood: a brewpub is coming to Westmoreland.

Here is Ezra's photo and write up: 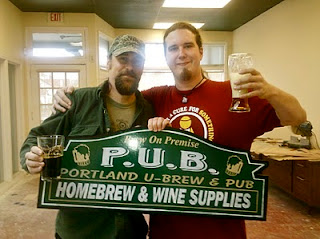 Introducing the next homebrew shop and brewpub in one the Portland U-Brew aka P.U.B. where you can brew on premises, or walk next door and drink the pub's own housemade brews.

Opening in an estimated couple of months on SE Milwaukee avenue. The P.U.B. will fill are your beery needs with three separate yet indefinitely intertwined business models with two doorways, one opening to a complete homebrew shop with everything a homebrewer might need, the other entrance a brewpub offering housemade brews, sandwiches and panini's, and a private party room. And finally the third section downstairs where a complete brewery is housed with lots of fermenter space for both the P.U.B.'s housemade brews but also where customers may produce their own small batches at up to a 20 gallon size.

Portland U-Brew is located in the quiet Sellwood neighborhood on the corner of Milwaukee and Tollman kitty corner to the Dairy Queen that has been around since I was a child. Housed in an unassuming and seemingly still vacant (from the outside) ex-office building that has been around since prohibition era 1923. The building is spacious and full of big and small spaces, one can imagine that an accounting firm once occupied the building. Owner/Brewer Jay Webb and homebrew shop manager Aaron Gillham are putting some serious work into spicing the place up though with a hippy/british vibe and lots of mural artwork.

Go to The New School to read the interview. 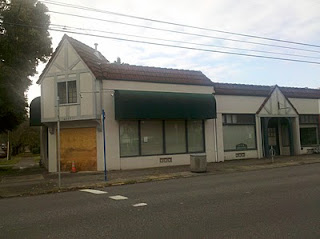 They will have a small four barrel system with six 20 gallon fermentors which means a lot of work for them, but a lot of variety for us punters.  They are also opening up a homebrew shop, which is excellent news for me, but I have a hard time envisioning myself anywhere else but Steinbarts - it is like going to communion in an Episcopal church for Catholics, it just seems wrong somehow. I imagine I'll change my mind when I realize I can walk to this shop.

I am not crazy about the name, but I am very happy to have a real brewpub in the neighborhood. We currently have Philadelphia's (which is only about 100 yards away) but it is not a pub, rather a cheese steak shop that brews, and the Oaks Bottom, which is a Lompoc pub, but does not brew. So, welcome to the neighborhood boys!
Posted by Patrick Emerson at 9:07 AM

Email ThisBlogThis!Share to TwitterShare to FacebookShare to Pinterest
Labels: P.U.B.

It was weird the first time I went to another homebrew store as well. I know what you're saying. We're excited to be in the neighborhood, and glad you're excited too. You should come by sometime and check out all the work that's been done since this post. Cheers!