A Tale of Two New Brewpubs

Yesterday, I met up with my friend Jeff for lunch and we strolled from his house to two new local Portland brewpubs: Coalition and Migration.

Ironically, John Foyston has an excellent profile of the two, and ten others, in today's Oregonian.

Our first stop was Coalition.  It was a damp and cool Portland day so the roll up door was closed, but inside was cozy, warm and inviting.  I didn't take pictures so I had to troll the intertubes for photos but found no glamor shots - Coalition might want to get on that as the space is great.  Here is one photo that gives you a good idea of the very small, but very inviting, space that I got from this blog that has a nice write-up on the food (so I don't have to).  Just for the record. I had the Satchel which, it turned out, was named for the delightful and friendly dog that kept us company during our lunch.  It was good I was happy to report to the namesake that seemed to wish that I would prove it to him by providing a sample.  Sorry Satchel. 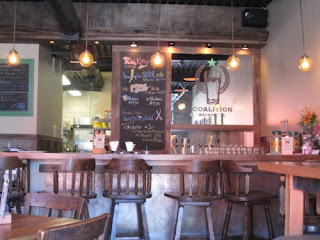 Jen Stevenson
What I came for was not the food but the beer and I decided to start with the prototypical Portland drink: the (Double Dog) IPA.  Foyston declares it his new favorite in his article, and I can see that it is designed for the Portland consumer's sweet spot.  Read: super hoppy.  It is an exceptionally crafted beer and I recommend it without reservation to the hopheads out there.  However, for me it was slightly out of balance, a bit more hops than the malt could adequately deal with.  It also nuked my palate so I had to recharge it with water and food.  Surprisingly, it was the King Kitty Red that Jeff ordered that hit my sweetspot.  Surprising because I am not generally a fan of the style, but with the intensely hop-forward brewing style of Coalition, I found the malt body the perfect balance to the hops which, at 59 IBUs, are not subtle.  It was excellent.

Given the weather it was the Maple Porter that was the real star of the day.  Despite the Maple Syrup it is actually a very dry porter, so the Maple balances it with barely detectable sweetness, but mostly adds a beautiful aroma and flavor to balance the roated malt notes.  Elan came in and, with Jeff throwing his weight around, gave us a sneak peak of the barrel aged Stout soon to be on offer.  It still needs a litte time, but the stout alone (their regular stout) is excellent and it was clear that in another week the bourbon barrel notes will come out from hiding and produce a wonderful (but very quaffable) barel-aged stout.  Look for it because it'll go fast.

Finally, we had a taste of their fresh hop offering which was definitely one of the better ones I have had this season.  It was right on the heels of the IPA so I couldn't taste all the fresh notes perfectly, but after a little palate cleansing they started to shine through.  Kudos as fresh hops are tough to deal with.  If I remember correctly, Kiley said that Coalition used Sterling hops, but don't quote me on that one.

Though new, I'd put Coalition right at the very top of Portland Brewpubs in term of the quality of the beer they are producing.  Hopefully, we'll start to see Coalition beers on tap around town because they are too good to stay confined to the Ankeny space.  Go and try it.

Migration has a great location and a great space, minimally done, but with a nice low-key vibe typical of Portland.  Foyston says it is evocative of the Lucky Lab and I can see the comparison, but I didn't find Migraiton quite as welcoming.  Migration, with some gaffitti in the loo, interesting choices for wall decoration and slightly loud music feels a little more like a college bar than the LL.  Nonetheless it is a nice space. 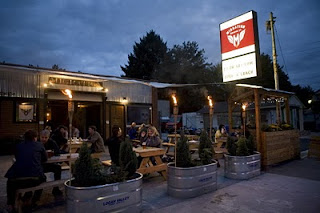 Ross William Hamilton/The Oregonian
The beer, unfortunately, is another matter.  I will start with the good: the Terry's Porter.  Kind of the opposite of the Coalition version, Migration's porter is sweet and smoky and lovely, without an off note (the fact that they stole Jeff's and my name - we first brewed Terry Porter in Madison, Wisconsin in 1993 - notwithstanding).  It is a very good porter and I highly recommend it.

The Migration Pale Ale (presumably their flagship as it carries the brand name), hoewever, is a disaster.  This was my first taste of Migration and the very first thing I noticed was how cold the beer is served.  It is literally ice-cold.  Woah, thought I, someone needs to tell them they are doing themselves a disservice because no one can taste their beer.  Later, after I sacrificed my poor hands to warm up the beer, I realized that there may be a method to their madness: the aromas and flavors that came out were simply unpleasant and unwelcome.  This on top of the fact that the beer itself, as crafted, is a discchordant mess: out of balance, out of harmony and palate deadening.  But the off flavors that followed when the beer warmed suggests a bigger probelm than the recipe - they have a problem in the brewhouse.

The Old Ale revealed that the off-flavor issue is more than just isolated to a single beer unfortunately.  Flavors and aromas that are neither intended nor welcome are present and made finishing the beer a challenge.  I'd like to think this is a start-up issue, as I have experienced even in my new little five gallon system, how hard it is to nail it right off the bat. And maybe it is, but Migration has been serving its own beer for about six months now and it is time they get their ship on course.  They have managed to get some pretty prominent tap handles around town, so it'll be interesting to see just how the Portland beer consumer reacts.

It is interesting to note that Foyson raves about, and highlights, Coalition beer, but never even mentions the beer at Migration.  Classy, but revealing.

It is also interesting to note that it took Kiley and Elan forever to get Coalition open, which gave them, and Bremaster Bruce McPhee, ample time to perfect their recipes.   The Migration boys had to convert their space with their own blood, sweat and tears which may have left them little time to perfect their beers or get used to their brewhouse.  I hope that they get it sorted soon because the competition in Portland is fierce, but their space and loaction is great and I'd like to see them thrive.

Onen final note: both Coalition and Migration have very good taste in music.
Posted by Patrick Emerson at 10:35 AM