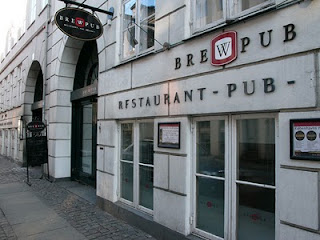 I have been baited:

I think the beeronomist might have something to add to this:

The Great Britain-wide average [for a pint of real ale bitter] was £2.80, a 4% rise on 2009. But this covers broad regional disparities, with the cheapest part of the country, the West Midlands, falling well short at £2.45 below the most expensive, Surrey, at £3.08.

According to the Guide's co-editor Fiona Stapley, the wide variation in prices reflects not just the socio-economic make-up of each area but also the levels of competition, the nature of their bars and the type of beer on offer.

"In areas where you have heavy concentrations of the big chains, the prices tend to be higher," she says. "In pubs which brew their own beer, prices are on average a third lower.

Actually I do. Nothing substantial, mind, more of a note about economics.

Economists call the process by which an imperfectly competitive firm (like a brewery) and a seller of the product both take a cut of profit double marginalization. Most non-economists understand this instinctively - the more actors involved in getting a product to market means a little markup each time.

Breweries (well, craft breweries at least) are imperfect competitors because they make a differentiated product - one that no one else makes quite like it.  Its all beer, however, suggesting that monopolistic competition might be the best model to think of, but whichever moniker you use the fact is that each breweries beer is unique in its own way. Nevertheless the beer marketplace is pretty competitive when you are in a retail environment because, despite being unique, a lot of craft beers are good substitutes for each other.

So in retail two things, over and above simple supply and demand, are going on to push prices in two directions: distributors and retailers are practicing double marginalization (or triple in this case) which adds to the price of beer. Lots of competition on the shelf or in the tap lineup however keeps prices from getting too high as each brewery knows that if you charge too much you will lose a lot of sales. In the end price reaches its equilibrium.

In the brewpub a slightly different dynamic is going on. The double marginalization is no longer in play which should suggest that prices would be lower in brewpubs (though remember scale economies are not as great for a brewpub as they are for a packaging brewery). But the nature of competition changes as well. Once customers are in the brewpub the brewer is essentially a monopolist and can, as monopolists do, charge more for their beer. So in this sense it is not surprising to see Oregon brewpub beer prices essentially the same as a non-brewpub.

Of course, there is competition among brewpubs and you might think that this would cause price competition leading to lower brewpub prices stemming from the choice by consumers of which brewpub to frequent. But Oregon brewpubs are pretty dang savvy about creating unique brand identities and unique brewpubs - think HUB, Lucky Lab and Deschutes' Portland Pub, all very different.

In fact, I think this is the most likely explanation for why brewpub prices are lower than regular pubs in England. In England the brewpub experience is similar to the pub experience and the customers are more price sensitive and not likely to pay more just to experience the pub. In Oregon, a brewpub is a special place and we value patronizing them. Perhaps also brewpub beers are not too different than locally available commercial beers - though it seems to me you could say this about Oregon as well.

It is only a theory, anyone wish to support or refute it?
Posted by Patrick Emerson at 1:28 PM