A Brewpub in India 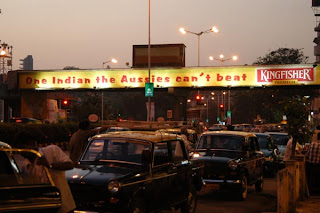 Via BeerNews I learn about this article on AnnArbor.com about Arbor brewing and their plans to franchise in India.

With business bubbling, Arbor Brewing Co. is accelerating plans to expand production and debut three new bottled beers in 2011 while undertaking an ambitious plan to overhaul its namesake Ann Arbor brewpub and Corner Brewery in Ypsilanti into green-energy showpieces.

The company, which recently marked its 15th birthday, is also working on a joint venture agreement to open its first franchise brewpub in Bangalore, India.

“The curve ball thrown in there is obviously the project in India,” Greff said. “We’ll just have to really work on the timing to make sure that these projects are complete, they’re well in hand before we head over to India for two months to get the brewery open over there.”

The deal with Gaurav Sikka, a University of Michigan graduate and former Arbor brewpub regular, will see the Greffs retain a 5 percent ownership stake in Arbor Brewing Co. India Ltd. The Greffs will also serve as consultants on the project, with audit controls for beer recipes and quality.

“It’s really their company, their project,” Greff said. “We’ve got very strong stipulations in the contract that all of our mores and business ethos need to be followed.”

If all goes well, the business could be franchised elsewhere in India.

“There’s a million different things going on for us in a lot of different directions but it all feels really natural, like it was a natural progression of things,” Greff said. “It feels great.”

Wow. Of all places to think a brewpub would work, India seems one of the most unlikely - Hindus generally eschew alcohol and when I studied there, alcohol consumption in public was rare. However, this was 20+ years ago now (can it really have been that long ago) and India has been completely transformed. Bangalore especially so - it was the most western of cities back then and remains so today.

But the American brewpub seems to be a good candidate for export elsewhere.  I travel overseas from time to time and am seeing more and more American style brewpubs in places as far off as Buenos Aires.  The Portland brewpub ethos of sourcing locally is great when you live in the epicenter of hops, barley and pure water, I wonder how it will translate to markets such as India where, one presumes, you will have to import all of your quality ingredients.  Also, Indian beer palates are not terribly sophisticated, as anyone who has had a Kingfisher can attest, so bringing along the consumer will be a challenge.  But I suspect that the clientele of this pub will be largely made up of Indians who have studied and worked in the US and already know the deal.  The danger is they also probably already know good beer.
Posted by Patrick Emerson at 10:58 AM

I lived in Kochi, India for six months and spent a most interesting weekend in Bangalore.

If there is one place where a Brewpub could work in India, it is Bangalore. The denizens of Bangalore think of themselves as another Silicon City. They are very young, very upwardly mobile. They have lots and lots of money, lots of free time and lots of need of alcohol to actually talk to the opposite sex.
Alcohol is still frowned upon in India, but everyone does it. The bigger issue with a brewpub won't be actually having customers, it'll be having customers you want and regulation.

If you go to a couple bars, you'll find that they are frequented by too many people in India who simply want to get hammered and quickly.
Also, alcohol regulations in India are ridiculous. While I was there, a hotel wanted a liquor license, but the state wouldn't legalize any more. So the hotel bought a small bar about 2 hours away (or 25 miles :)) and simply moved the liquor license. They also had to pay off how many people...

The corruption in India is astounding at times, doubly so if anyone thinks you're American and you have lots of money. Setting expectation with their regulators so they don't have to bribe everyone will be incredible difficult.

Far out. You'd have to put it in a major city or one with major richies--so Bangalore fits the bill. Ten to one that half the people in the pub on any given night will be expats from Australia, Europe, or North America.

I know that when I visit India, I'd kill for a decent beer.

You know, Bangalore has good coffee, too--something else I'd kill for.