Update: Just transferred it to a secondary fermenter and took a little zwickel.  Result: not half bad.  A little intensely bitter, but the hops do sing - beautifully aromatic and flavorful.  I think this, done again properly, may well be the HOPOPOTAMUS flag bearer.

It is with a bit of sheepishness that I admit to being, up until recently, a partial extract brewer.  Partly this is because of how successful you can be brewing with part grain/part dry malt extract, partly it is due to the the additional equipment requirements, but mostly it was due to lack of imagination and motivation.  But my brother, the professional brewer, called me a wimp for not going all-grain and extolled the virtues of the added flexibility all-grain brewing provides.

But first a little background.  When I begin to consider going all-grain, I of course thought of the cheap converted plastic cooler and was ready to invest the $50 and get going.  But alas my wife, erstwhile employee of an environmental organization, starting yammering on about heating up plastic, venting toxins, yada yada yada.  [Next she'll be on about the dangers of storing waste from an alumina plant in a big reservoir - yea right, like what could possibly go wrong with that?]  Anyway, so the plastic cooler plan was scuttled.

Thus it came to pass that my birthday arrived and my whole family got together and bought me an obscenely fancy - but obscenely cool - mash tun and I was a-ready to brew.  [They also bought me a massively outsized but incredibly awesome mash paddle] 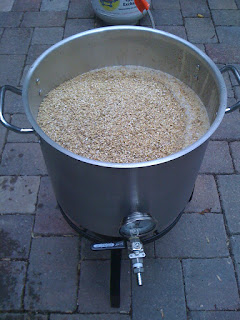 The Mash
What better way to begin my life of all-grain brewing, thought I, than to brew the next installment of THE HOPOPOTAMUS - the best beer in the world?   So off to Steinbart's I went, collecting The Beerax along the way, to buy an enormous amount of grain.  13.5 pounds to be precise.  I also grabbed five, yes five different varieties of hops, one upping the previous Hopopot by adding Columbus hops to the mix. 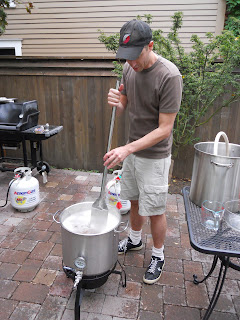 The Beerax and the Paddle
And we were ready to begin.

We got the strike water up to the prescribed temperature, 168 degrees and 'doughed-in.'  [We both agreed, by the way, that the best part of all-grain brewing was being able to use all of the cool lingo - though there were a few quick checks of the iPhone to make sure we were not abusing terminology]

And here the problems started.  As novice mashers we watched in horror as the needle on the thermometer sped past the low 150s target and kept on going down to 138.  Panic and horror set in, so we fired up the gas burner and let her rip.  Finally, after a lot of heat, the temperature started to rise and we cut the gas, wrapped the tun in moving blankets and believed we had dodged a bullet. 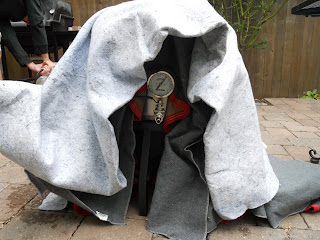 Cozy
But of course we were just impatient and soon our temperature was rising and fast.  So we threw off the blankets, took off the lid, hosed off the outside but nothing worked.  The temperature kept on rising eventually stalling at 168.   Depressed, we soldiered on hoping that the gods of homebrewing would protect us. [There was a moment at which we considered getting more grain and doing it over - after all the grain is the least expensive part, by far.  We didn't, though in retrospect I wish we had]  So this was mistake #1.

So next it was on to sparging and lautering where we were very careful to get 6 gallons of wort so we would have the desired 5.5 gallons in the fermenter, figuring a half gallon evaporation for the 60 minute boil.    Having done so we decided to put it back into the mash tun so that we could have loose hops and use the false bottom as a filter for the hops.  This was mistake #2. 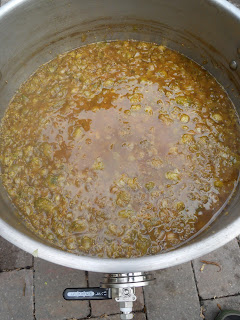 Hops, lots of hops
With such an enormous amount of hops it quickly became sludge (though lovely, aromatic sludge) as the dried hops kept on absorbing water.  When it came time to transfer it to the fermenter we had only about 4 gallons left.  Oy. Plus we decided to take the OG reading and found that (surprise!) we had done just what we worried about and effectively stopped the mash by overheating it and our OG was way, way low (we were going for 1.068 and we got 1.050).

So here we have a humongously hopped, light bodied beer - a disaster.  Yet I press on.  It sits in the fermenter as I hope vainly that somehow a great beer will still emerge.

Needless to say, this has lost the right to be called THE HOPOPOTAMUS.   Jeff thinks 'Fire Breathing Dragon' is a good name, while I suggested 'Chemical Burn.'  We shall await the final product to determine the appropriate moniker. 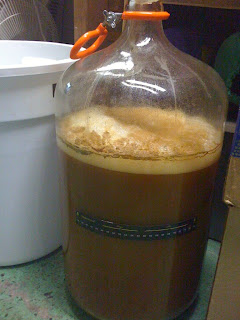 Fire Breathing Dragon!
Anyway, the good news is that we learned a lot about the process - mainly to trust the calculations and be patient with the mash, and use a hop bag instead of loose hops.  Next time will be better.  I have to admit to still being a little excited to taste this beer.  It has been a long time since I brewed a bad beer and this one promises to be memorable...

I have one lingering question: the false bottom on the mash tun sits about one inch above the bottom meaning a lot of water sits there during the mash not in contact with the grain - is this a problem?  Anyone?
Posted by Patrick Emerson at 8:50 AM

Good lord, that half-assed guy you brew with looks remarkably like me.