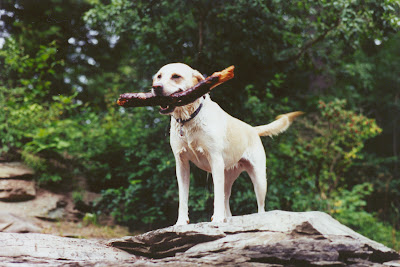 We had to make the excruciatingly difficult decision to put our dog of almost 15 years down this weekend. If she had been stricken by an aggressive disease and was suffering visibly it would have been easier.  But she was mostly just old and was no longer able to get up on her own, was losing control of her bowels and had great difficulty walking.  How do you know when the time is right?  I have no answer.

What I know is that she was a great dog.  A Labrador through and through: she loved swimming and fetching (and the combination especially). A chance to swim would excite her more than anything else in the world.  The picture above is her about two or three years old in the Wildflower Preserve in Ithaca, New York at a popular dog swimming hole with rocks she could launch herself from.  I love this picture because I can't think of another one in which she looks as completely happy - dripping wet, big stick in mouth, tail wagging vigorously, ready to do it again...and again and again and again...

We got her as a puppy and had the choice of the litter.  How to make such a choice was answered (in typically social scientist fashion) by the puppy personality test from the wonderful book "The Art of Raising Your Puppy" by the Monks of New Skete. We wanted a moderate dog, not too dominant but self-confident, so we gave her and her sister the test (she had eight brothers, be we wanted a female) and she got mostly 3s.  Perfect.  And thus she was: wonderfully confident, a little willful but not too much - and, typical of Labs, the friendliest dog you could ever meet.

We got her the first summer we spent in Ithaca, between my first and second year in the economics PhD program at Cornell.  I had to study for the make-or-break exam in macroeconomics that summer and so little Zooey would sleep in her crate next to my desk and I would study and every hour or two we would take a break and go outside.  I passed the exam and the rest is history.  She was my constant companion ever since, was a gentle and proud caretaker of my sons and a constant reminder to get outside and enjoy nature.

I will miss her and I don't much feel like blogging...
Posted by Patrick Emerson at 9:32 AM

I lost my lab of 10 years a few months ago. He and his brother dog got out after the lawn man didn't latch the gate properly, and they were both hit by cars in the same evening. I got Dexter when he was a year old-he'd been abused and my 16-year-old heart had just been broken for the first time. We healed each other. I miss him so much...and I know you'll miss your Zooey. I'm thinking good thoughts and sending them your way. She'll be on the other side of the rainbow bridge waiting on her family.