Middle Class Spending on Alcohol is Down 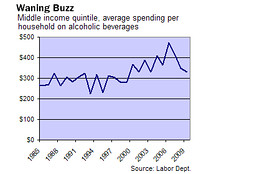 The Wall Street Journal reports on data from the Consumer Expenditures Survey that show that average spending on alcohol for those in the middle income quintile fell more than 20 percent last year.  But is this bad or good news for beer?   As the article points out this does not mean that they are consuming any less alcohol, they may instead be switching to lower coast alternatives.  They may be moving from whiskey to beer for example or from expensive whiskey to less expensive whiskey.  It all gets back to whether beer (and especially craft beer) is a normal good or an 'inferior' good.  Don't get mad beer lovers, inferior is simply a term of art in economics for a good which you consume more of when income declines.  Just like how you might switch to hamburger and away from sirloin as incomes decline, you might drink less single malt and more craft beer.

Anyway, looking at the beer statistics it is imports that are suffering which I think is more of a symptom of the growing domestic craft beer awareness.  For a while it used to be if you wanted good beer you almost had to go import, but no more.

Interestingly, the wealthy spent more on alcohol during this same period.  There is some sort of joke in here about using alcohol to assuage the guilt of rising income inequality but I am not going to make it.
Posted by Patrick Emerson at 3:44 PM

Clearly they did not poll me and my spending habits!

Spending on Craft Beer is WAY up in my middle class household!

Actually, I think imports are falling because the main brands in that category are light lagers from Mexico--chiefly Corona and Corona Light. Domestic versions of these beers are getting killed now, which I suspect is happening to the Mexicans.

Which is good, because people should only be drinking Pacifico and Negra Modelo.