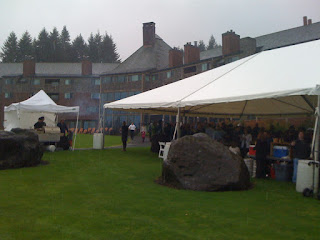 This weekend I was a guest of the Skamania Lodge for their Celebration of Beer event.  Though the weather left a little to be desired (though I have to admit, I love evergreen clad mountains in the mist) it is an amazing setting and the event was a lot of fun.  The tent kept everyone dry and the beer kept everyone warm.  Full Sail sent their winter Wassail which was a prescient choice given the weather.

I have been to many beer events now (and my job takes me to many hotels) and I must say that this event  is by far the best I have attended, particularly because I am a little claustrophobic in crowds and the big events overwhelm me.  Plus, I do love the Pacific Northwest and the setting at Skamania can't be beat.  The hotel is very nice, very well-run with a nice attention to detail, yet it maintains a relaxed and casual vibe.  The festival itself mimics the Lodge (well-run, relaxed and casual) and while there are still a few kinks to be smoothed out of the two year old event, it is already a real star in the Oregon and Washington beer event universe.

Here are my reflections about the weekend:

Skamania Lodge is nestled on the woods on a hillside on the north bank of the Columbia River in the gorge just west of Stevenson, Washington.  It is a very quick drive from Portland and includes a trip over the very scenic Bridge of the Gods - it took me about 45 minutes.

The building is what my wife described as Timberline modern.  Lots of exposed timber and fir trim.  The lodge lobby opens up into a three story great room with a large stone fireplace that featured a roaring real wood fire.  A window wall on the opposite side provides an amazing view of the Columbia River and gorge.  The room was well used given the weather outside and there was complementary coffee (hot, fresh and excellent), hot chocolate and apple cider (the latter two powdered).

It is really hard to think of another place as quintessentially Northwest as the Skamania Lodge with towering firs all around, a spectacular vista and the typical lodge style architecture.  I was charmed.  I had my kids with me and they had a great time playing in the pool and outdoor spa while I sampled the beers.  I should note however, that the beer event itself was very kid-friendly and on a nice day the kiddies could have a blast running around the lawn and eating hamburgers while mom and pop enjoyed the beer. 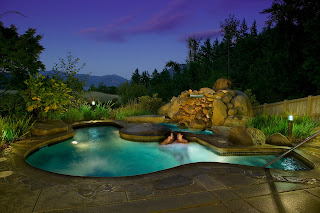 The Celebration of Beer weekend still feels a little bit in its infancy, but there were plenty of people at the lodge that seemed to be there specifically to attend the event.  On a sunny day the setting alone would make it the best beer event around. But, given its location at the lodge, the thing I appreciated most was the relatively low-key vibe.  None of the beer fest whoops and crowds, a duo playing acoustic music and a casual and relaxed crowd created an atmosphere conducive to good conversation and savoring of good beer.

The mugs were high quality glassware, not plastic - which makes for nicer sipping. There was food available which looked good - standard burgers and sausage as far as I could tell - though I didn't sample.  There was a smattering of tables and chairs available under the tent and I imagine that if it was a nice day there would be many more on the lawn.

Other events scheduled for the weekend were a beer battered and boiled seafood buffet.  I have to admit that I generally associate buffet with mediocre, but as a aficionado of fish and chips, I was looking froward to some beer battered fish even if it was limp fish having sat too long.  In fact the battered catfish  was quite tasty even if it did suffer from its time in the hot plate, maybe it was the beer.  But the quality and variety of dishes (all made with beer from the festival) was really great.  I especially liked the mussels and clams, the shrimp and a really lovely cheddar soup made with Full Sail Lupulin.

The Kegs and Eggs breakfast buffet was the usual Skamania buffet which is one of those full-on mega brunches with just about anything you could possibly want. It was all excellent, and needless to say my kids loved it.  Highlights included lots of fish, eggs benedict and a nice salmon hash.  My son on the way home kept saying "I can't believe they had dessert for breakfast!" 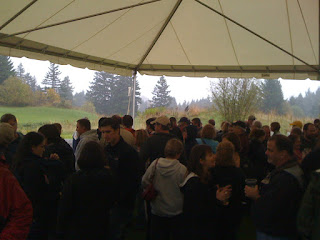 It was really nice to be able to try some beers from places that you don't often see in the Portland market. The two breweries that really stood out for me were Snipes Mountain from Sunnyside, Washington and Prodigal Son from Pendleton.  Snipes Mountain's Fresh Hop Ale was quite possibly the best one I have had this season.  A quick chat with the brewer revealed his choice of Simcoe and Citra hops, the latter added in the fermenter.   It had a wonderful citrus nose, was a beautiful blond/straw color and had a great full and creamy mouthfeel. Excellent.  I didn't ask, but it would be good to confirm that this was a true wet hop beer as it certainly felt more refined.  Prodigal Son's porter was a perfect beer for the weather and a great porter to boot.  Just the right roasted note along with hints of coffee and chocolate.

Frankly there weren't that many special beers and I couldn't resist indulging in some Double Mountian IRA which is devilishly difficult to track down in Portland (where everyone seems to put Molten Lava on tap instead).  It is one of my favorites (and incredible on cask which you can find at Green Dragon now - run!).  Yakima had a fresh hop IPA which was good if not great.  This year's Full Sail Wassail was there and was delightful, a nice pairing with a particularly hard downpour. 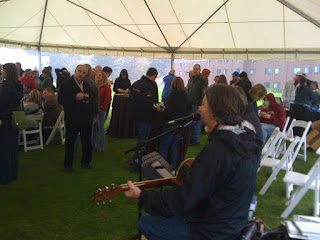 It is pretty clear that this is an event that the Lodge hopes will bring in Fall guests and help showcase the property, but they also are providing as venue for some lesser known Oregon and Washington breweries.  As such, my role is to help publicize both because the brewers will be inclined to bring their beer if they think it'll help get them noticed and get some positive buzz. It makes me wonder how hard it is to get breweries to participate and whether participating is a money maker or if they take a loss for the exposure.  In some festivals, like the OBF, getting in is a big deal.  I wonder if breweries are hoping to be involved in this or if it is still small and less well known enough that the lodge has to work to get participants.

To put it another way I guess, I wonder what are the economics of the thing?

In terms of household economics an event like this is a more spendy proposition than the normal beer festival, especially if you go for a room package (you can just come for the afternoon - it is less than an hour from Portland), but it is worth it.  Being able to go from beer festival to nice meal to outdoor jacuzzi to a cozy bed is pretty great.  Then you can wake up the next morning and hike it all off.

My incentives are clear: they provide the weekend and hope to get some good recognition on the internets.  This can be a real conundrum if the place and the event suck so I had just a little trepidation going in - especially because of the truly foul weather, I figured the event could end up in disaster. Happily I don't have to condemn the even nor even try and conjure up faint praise I hope readers will see through, because the event and the place are both great.  Foul weather only served to emphasize how together the organizers are - the rain never got in the way of the enjoyment of the fest.

It was a great event, but nevertheless I think it can be improved and so here are a few problems I identified.

The was no guide to the beers and, because of the steady rain, areas around the taps were very crowded, thus it was very hard to figure out what was on offer.  Even the tap areas often had precious little info.  Only by word of mouth did I find out that Yakima had a fresh hop IPA.  I won't gripe about the crowdedness because it was just that most people seemed to stand and chat right in front of the taps and this would not have happened absent the poring rain.

There were really only a few special beers (or at least that I could find) but perhaps that is because I just had been to the fresh hop fest and quite a few breweries went the fresh hop route for the special beers.  For example Double Mountains was Killer Green - not special to me but I suppose it qualifies. In the future it might be better to pick a theme and try to get breweries on board with bringing beers based on that theme.  Fresh hop is pretty well covered, and especially so in the gorge, so perhaps a "fall beer" theme however breweries want to interpret that (porter maybe?).

Many brewers were around, but they weren't sticking by their beer to chat and offer info.  The pourers were hotel employees that were very nice but knew nothing at all about the beer.  Brewers, god bless 'em, aren't necessarily marketing types, but other than Lazy Boy, they did not seem to be engaging drinkers of their beer. Pity.

As this event matures they are going to have to do a little more to cater to the beer geeks.  Asking the breweries to provide descriptions of their beers and printing it all up would be a huge improvement.  Apparently they rolled out the special beers one hour earlier than last year, but I would suggest even earlier.  After an hour you can let breweries roll out their beers, I think.

Water to wash out glasses between samples was also non-existant (of course you could just hold your glass under the edge of the tent and it would be full in a few seconds!).

And the worst of all: Neither the Duck nor Beaver game was available on the lodge's TV system!  Dang.

Many patrons would get a full glass and bring it back to the lobby with a roaring fire and a view (through the rain and crowds) of the river and mountains behind.  I did this at the end.  Grabbed a full glass of Double Mountain's IRA and enjoyed the view and the fire (this picture is from the next morning but you get the idea). That, in essence, is why this event (even in the rain) is a treasure. You should give it a try sometime (even if not for the event, you can have a drink in the lobby any time you want). 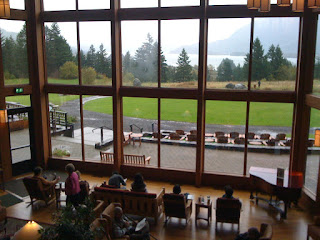 By the way, for a near-poetic description of the lodge, the grounds and last years festival that was bathed in sun, see Jeff at Beervana's posts on the lodge and the fest.  As the rain was relentless, I saw little else than the interior of the lodge and Jeff saw and commented on much more.
Posted by Patrick Emerson at 8:30 AM