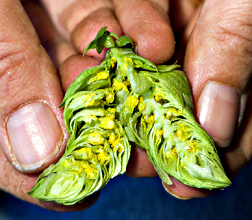 So I am about two years late on this, but I stumbled across this little tidbit about some interesting hops research:

Currently, poultry producers use sub-therapeutic amounts of antibiotics in poultry feed as growth promoters and to control bacterial pathogens or parasites. However, bacteria can become resistant to the antibiotics, so ARS scientists are looking for alternatives.

The hop plant (Humulus lupulus) contains bitter acids known to be potent antimicrobials. One of these compounds, lupulone, was thought to control levels of the disease-causing agent Clostridium perfringens in chickens.

ARS scientists, working under a cooperative research agreement with hops producer Hopsteiner in Yakima, Wash., examined the effect of feeding different concentrations of lupulone to broiler chickens to determine the compound's impact on Clostridium populations in the intestinal tracts of birds inoculated with C. perfringens.

A research team ... delivered different concentrations of lupulone via water to chickens inoculated with C. perfringens. After 22 days—the timeframe associated with clostridial disease in broiler chickens—C. perfringens counts were significantly reduced in the lupulone-treated group compared to another group of chickens that did not receive the lupulone treatment. The reductions ranged from 30 to 50 percent.

According to the team, the potential for lupulone as an antibiotic alternative in poultry rearing is feasible based on these results.

Fall is here, sickness is everywhere, I must drink beer to protect myself and keep myself healthy. 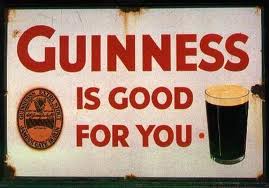 Posted by Patrick Emerson at 11:23 AM